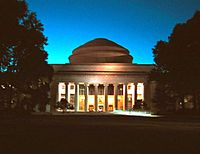 Massachusetts Institute of Technology at night.

The Massachusetts Institute of Technology (MIT) is a private university in Cambridge, Massachusetts. MIT has five schools and one college, and it has 32 academic departments, and gives much importance to scientific and technological research. MIT students, graduates, and faculty members are famous for being given many awards, including 76 Nobel Prizes. In 2013 QS ranked MIT as the best university in the world. It started in 1861. It is one of the most selective universities. It accepted 8.9% of people who applied for class of 2016. Nine months' tuition and fees for 2012–2013 is $42,050. MIT gives financial aid so that anyone who is good enough can pay. In 2011-2012 64% of undergraduates had some kind of financial aid. The student:faculty ratio is 8:1. 45% of undergraduates are women. The most popular major is engineering.

All content from Kiddle encyclopedia articles (including the article images and facts) can be freely used under Attribution-ShareAlike license, unless stated otherwise. Cite this article:
Massachusetts Institute of Technology Facts for Kids. Kiddle Encyclopedia.