Steven Weinberg ( May 3, 1933 – July 23, 2021) was an American theoretical physicist and Nobel laureate in Physics for his contributions with Abdus Salam and Sheldon Glashow to the unification of the weak force and electromagnetic interaction between elementary particles.

He held the Josey Regental Chair in Science at the University of Texas at Austin, where he was a member of the Physics and Astronomy Departments. His research on elementary particles and physical cosmology was honored with numerous prizes and awards, including in 1979 the Nobel Prize in Physics and 1991 the National Medal of Science. In 2004, he received the Benjamin Franklin Medal of the American Philosophical Society, with a citation that said he was "considered by many to be the preeminent theoretical physicist alive in the world today." He was elected to the US National Academy of Sciences and Britain's Royal Society, as well as to the American Philosophical Society and the American Academy of Arts and Sciences.

Weinberg's articles on various subjects occasionally appeared in The New York Review of Books and other periodicals. He served as a consultant at the U. S. Arms Control and Disarmament Agency, President of the Philosophical Society of Texas, and member of the Board of Editors of Daedalus magazine, the Council of Scholars of the Library of Congress, the JASON group of defense consultants, and many other boards and committees.

Steven Weinberg was born in 1933 in New York City. His parents were Jewish immigrants; his father Frederick worked as a court stenographer, while his mother Eva (Israel) was a housewife. Becoming interested in science at the age of 16 through a chemistry set handed down by a cousin, he graduated from Bronx High School of Science in 1950. He was in the same graduating class as Sheldon Glashow, whose own research, independent of Weinberg's, would result in their (and Abdus Salam's) sharing the 1979 Nobel in Physics.

Weinberg received his bachelor's degree from Cornell University in 1954. There he resided at the Telluride House. He then went to the Niels Bohr Institute in Copenhagen where he started his graduate studies and research. After one year, Weinberg moved to Princeton University where he earned his Ph.D. in physics in 1957, completing his dissertation, titled "The role of strong interactions in decay processes", under the supervision of Sam Treiman.

After completing his PhD, Weinberg worked as a postdoctoral researcher at Columbia University (1957–1959) and University of California, Berkeley (1959) and then he was promoted to faculty at Berkeley (1960–1966). He did research in a variety of topics of particle physics, such as the high energy behavior of quantum field theory, symmetry breaking, pion scattering, infrared photons and quantum gravity. It was also during this time that he developed the approach to quantum field theory that is described in the first chapters of his book The Quantum Theory of Fields and started to write his textbook Gravitation and Cosmology, having taken up an interest in general relativity following the discovery of the cosmic microwave background radiation. Hw was also appointed the senior scientist at the Smithsonian Astrophysical Observatory. The Quantum Theory of Fields spanned three volumes and over 1500 pages, and is often regarded as the leading book in the field.

In 1966, Weinberg left Berkeley and accepted a lecturer position at Harvard. In 1967 he was a visiting professor at MIT. It was in that year at MIT that Weinberg proposed his model of unification of electromagnetism and nuclear weak forces (such as those involved in beta-decay and kaon-decay), with the masses of the force-carriers of the weak part of the interaction being explained by spontaneous symmetry breaking. One of its fundamental aspects was the prediction of the existence of the Higgs boson. Weinberg's model, now known as the electroweak unification theory, had the same symmetry structure as that proposed by Glashow in 1961: hence both models included the then-unknown weak interaction mechanism between leptons, known as neutral current and mediated by the Z boson. The 1973 experimental discovery of weak neutral currents (mediated by this Z boson) was one verification of the electroweak unification. The paper by Weinberg in which he presented this theory is one of the most cited works ever in high-energy physics.

After his 1967 seminal work on the unification of weak and electromagnetic interactions, Weinberg continued his work in many aspects of particle physics, quantum field theory, gravity, supersymmetry, superstrings and cosmology. In the years after 1967, the full Standard Model of elementary particle theory was developed through the work of many contributors. In it, the weak and electromagnetic interactions already unified by the work of Weinberg, Abdus Salam and Sheldon Glashow, are made consistent with a theory of the strong interactions between quarks, in one overarching theory. In 1973, Weinberg proposed a modification of the Standard Model which did not contain that model's fundamental Higgs boson. Also during the 1970s, Weinberg proposed a theory later known as technicolor, in which new strong interactions resolve the hierarchy problem.

Weinberg became Eugene Higgins Professor of Physics at Harvard University in 1973, a post he held until 1983.

In 1982 Weinberg moved to the University of Texas at Austin as the Jack S. Josey-Welch Foundation Regents Chair in Science, and started a theoretical physics group at the university that now has eight full professors and is one of the leading research groups in the field in the US.

Weinberg is frequently among the top scientists with the highest research effect indices, such as the h-index and the creativity index. The theoretical physicist Peter Woit called Weinberg 'arguably the dominant figure in theoretical particle physics during its period of great success from the late sixties to the early eighties', referring to his contribution to electroweak unification as 'to this day at the center of the Standard Model, our best understanding of fundamental physics'. Science News named him along with fellow theorists Murray Gell-Mann and Richard Feynman as the leading physicists of the era, which commented that "Among his peers, Weinberg was one of the most respected figures in all of physics or perhaps all of science". Sean Carroll called Weinberg one of the “best physicists we had; one of the best thinkers of any variety” who “exhibited extraordinary verve and clarity of thought through the whole stretch of a long and productive life.”, while John Preskill called him "one of the most accomplished scientists of our age, and a particularly eloquent spokesperson for the scientific worldview". Brian Greene said that Weinberg had an “astounding ability to see into the deep workings of nature” that “profoundly shaped our understanding of the universe". Upon the awarding of the Breakthrough Prize in 2020, one of the founders of the prizes, Yuri Milner described Weinberg as a “key architect” of “one of the most successful physical theories ever”, while string theorist Juan Maldacena, the chair of the selection committee said, “Steven Weinberg has developed many of the key theoretical tools that we use for the description of nature at a fundamental level". 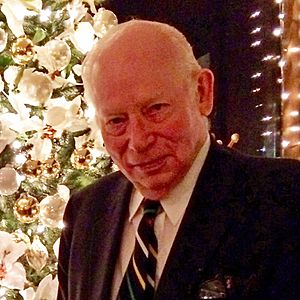 Besides his scientific research, Weinberg was a public spokesman for science, testifying before Congress in support of the Superconducting Super Collider, writing articles for The New York Review of Books, and giving various lectures on the larger meaning of science. His books on science written for the public combine the typical scientific popularization with what is traditionally considered history and philosophy of science and atheism. His first popular science book The First Three Minutes: A Modern View of the Origin of the Universe in 1977 described the start of the universe with the Big Bang and enunciated a case for its expansion.

Although still teaching physics, in later years he turned his hand to the history of science, efforts that culminated in To Explain the World: The Discovery of Modern Science (2015). A hostile review in the Wall Street Journal by Steven Shapin attracted a number of commentaries, a response by Weinberg, and an exchange of views between Weinberg and Arthur Silverstein in the NYRB in February 2016.

In 2016, he became a default leader for faculty and students opposed to a new law that allowed the carrying of concealed guns in UT classrooms. Weinberg announced that he would be prohibiting guns from his classes, and said he would stand by his decision to violate university regulations in this matter even if faced with a lawsuit. Weinberg never retired and taught at UT until his death.

Weinberg married Louise Weinberg in 1954, who went on to become a law professor at the University of Texas. They had one daughter, Elizabeth.

Weinberg identified himself as a liberal. He was also known for his support of Israel, which he characterised as "the 'most exposed salient' in a war between liberal democracies and Muslim theocracies." He wrote an essay in 1997 titled "Zionism and Its Adversaries" to explain his views on the issue.

In the 2000s, Weinberg canceled trips to universities in the United Kingdom because of the British boycotts directed towards Israel. At the time, he explained:

Given the history of the attacks on Israel and the oppressiveness and aggressiveness of other countries in the Middle East and elsewhere, boycotting Israel indicated a moral blindness for which it is hard to find any explanation other than antisemitism.

Weinberg was an atheist. Weinberg stated his views on religion in 1999:

Frederick Douglass told in his Narrative how his condition as a slave became worse when his master underwent a religious conversion that allowed him to justify slavery as the punishment of the children of Ham. Mark Twain described his mother as a genuinely good person, whose soft heart pitied even Satan, but who did not doubt the legitimacy of slavery, because in years of living in antebellum Missouri she had never heard any sermon opposing slavery, but only countless sermons preaching that slavery was God's will. With or without religion, good people can behave well and bad people can do evil; but for good people to do evil—that takes religion.

Before he was an advocate of the Big Bang theory, Weinberg stated:

The steady-state theory is philosophically the most attractive theory because it least resembles the account given in Genesis. 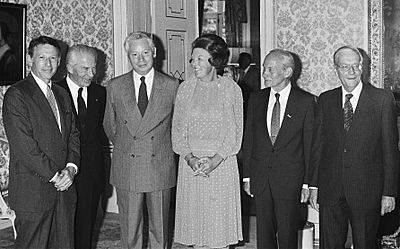 Queen Beatrix meets Nobel laureates in 1983. Weinberg is to the left of the queen.

All content from Kiddle encyclopedia articles (including the article images and facts) can be freely used under Attribution-ShareAlike license, unless stated otherwise. Cite this article:
Steven Weinberg Facts for Kids. Kiddle Encyclopedia.