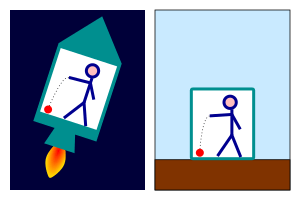 According to general relativity, objects in a gravitational field behave similarly to objects within an accelerating enclosure. For example, an observer will see a ball fall the same way in a rocket (left) as it does on Earth (right), provided that the acceleration of the rocket is equal to 9.8 m/s (the acceleration due to gravity at the surface of the Earth).

General relativity explains gravitational lensing, which is light bending when it comes near a massive object. This explanation was proven correct during a solar eclipse, when the sun's bending of starlight from distant stars could be measured because of the darkness of the eclipse.

Einstein himself did not have the idea of a "black hole", but later scientists used this name for an object in the universe that bends spacetime so much that not even light can escape it. They think that these ultra-dense objects are formed when giant stars, at least three times the size of our sun, die. This event can follow what is called a supernova. The formation of black holes may be a major source of gravitational waves, so the search for proof of gravitational waves has become an important scientific pursuit.

Imagine you are flying through space in a space race with a friend. You both wear identical watches. If you travel much faster, closer to the speed of light and pass your friend, your watch will be ticking more slowly than their watch. Your friend will see their watch ticking faster than yours (physicists call this effect "time dilation"). Your friend will also see you becoming smaller and you will see your friend becoming bigger.

These size and time changes are present at any speeds but are only noticeable at very high speeds that are close to the speed of light (186,000 miles (299,000 km) per second), so we don't notice them in our every day life.

All objects bend space around them (even children in class), but it only becomes visually noticeable for very big objects like planets and stars.

All content from Kiddle encyclopedia articles (including the article images and facts) can be freely used under Attribution-ShareAlike license, unless stated otherwise. Cite this article:
General relativity Facts for Kids. Kiddle Encyclopedia.