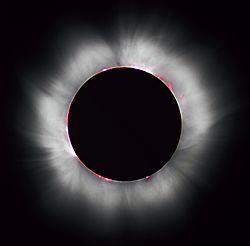 Photo taken during the 1999 eclipse.

When seen from Earth, a solar eclipse (ee klips') happens when the Moon passes between the Earth and the Sun. This makes the Moon fully or partially (partly) cover the sun. Solar eclipses can only happen during a new moon. Every year about two solar eclipses occur. Sometimes there are even five solar eclipses in a year. However, only two of these can be total solar eclipses, and they are quite uncommon.

Eclipses are total only in a narrow track along the Earth, and only for a few minutes. Outside this path, all eclipses are partial, and places far from the track get no eclipse at all. The track can be predicted many years before it happens. Many people who are sometimes called "eclipse chasers" or "umbraphiles" (the moon's shadow is called an umbra) travel to faraway places to see solar eclipses. After the solar eclipse on August 11, 1999, in Europe, people began to show more interest in solar eclipses. On October 3, 2005, there was another solar eclipse, and unusually many people came to see it.

A total solar eclipse is a natural phenomenon (event). Long ago, solar eclipses were thought to happen because of something supernatural or as a sign that something bad was going to happen. This is still believed in some cultures today. A total solar eclipse can frighten people who do not know what it means, because the Sun seems to disappear during the day and the sky turns dark in just a few minutes. 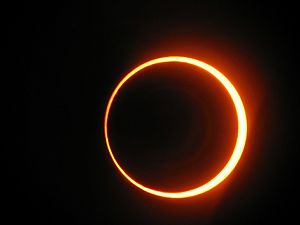 There are four different types of solar eclipses:

Looking at a solar eclipse 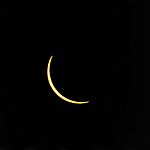 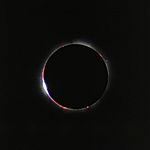 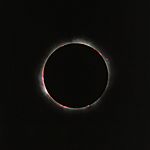 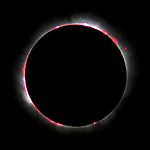 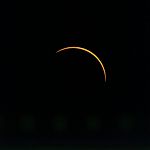 Looking directly at the bright surface of the Sun itself can hurt the retina of the eye greatly because of the radiation that comes from the Sun. It can even blind people. The retina does not feel pain, so damage may not be felt for hours.

The Sun is usually so bright that it is hard to look at it directly. However, when the Sun is covered in an eclipse, it is easier to look at it. Looking at the Sun during an eclipse is equally dangerous, except in the very short time when the Sun's surface is completely covered. Looking at the Sun's surface through binoculars, a telescope, or even a camera is extremely dangerous and can damage the eye in less than a second.

Looking at the Sun without an eclipse does not usually hurt the eye very greatly, because the pupil of the eye closes down and makes everything darker. If the Sun is almost completely covered, the pupil opens because there is not as much light. However, the parts of the Sun that can be seen are still equally bright, and can hurt the eye very much.

All content from Kiddle encyclopedia articles (including the article images and facts) can be freely used under Attribution-ShareAlike license, unless stated otherwise. Cite this article:
Solar eclipse Facts for Kids. Kiddle Encyclopedia.