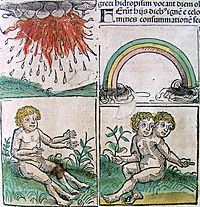 Examples of omens from the Nuremberg Chronicle (c. 1493)

An omen is a sign that is thought to foretell the future, often signifying the advent of change. The word can mean something either "good" or "bad" is about to happen. The origin of the word is unknown, although it may be connected with the Latin word audire, meaning "to hear". An example from the past, babies born with birth defects were believed to be a bad or evil omen.

All content from Kiddle encyclopedia articles (including the article images and facts) can be freely used under Attribution-ShareAlike license, unless stated otherwise. Cite this article:
Omen Facts for Kids. Kiddle Encyclopedia.