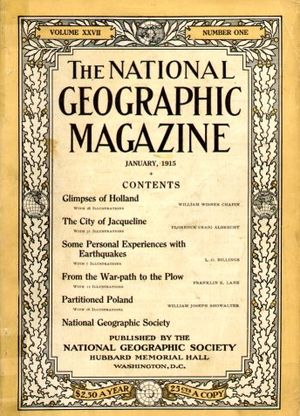 The magazine is published monthly. Additional maps are also included with subscription copies. It is available in a traditional printed format. Special and online formats are also available.

In 2008 the magazine won three National Magazine Awards. This included a prestigious award for general excellence the second year in a row.

The magazine has had various editors since it was founded.

All content from Kiddle encyclopedia articles (including the article images and facts) can be freely used under Attribution-ShareAlike license, unless stated otherwise. Cite this article:
National Geographic (magazine) Facts for Kids. Kiddle Encyclopedia.