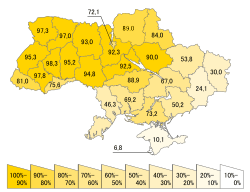 The Ukrainian language (Ukrainian: українська (мова), transliteration: ukrajins'ka mova) is an Eastern Slavic language. This language is a part of the Indo-European language family.

Ukrainian is the second most spoken Slavic language. It is the official language of Ukraine. There are 37 million speakers in Ukraine. Most of them are native speakers. All over the world there are more than 50 million speakers.

The Ukrainian language is written with Cyrillic letters.

Some words are similar to the Polish language.

The Ukrainian alphabet with transliteration and German transcription:

1only before o
2only after consonants; a capital letter does not exist; the soft sign ь is not a letter representing a sound, but modifies the sound of the preceding letter, indicating palatalisation ('softening').
3an apostrophe (’) is used to mark de-palatalization of the preceding consonant.

All content from Kiddle encyclopedia articles (including the article images and facts) can be freely used under Attribution-ShareAlike license, unless stated otherwise. Cite this article:
Ukrainian language Facts for Kids. Kiddle Encyclopedia.