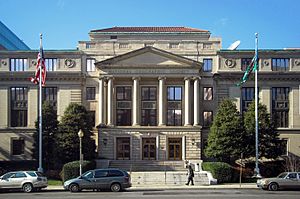 The National Geographic Society (NGS), headquartered in Washington, D.C. in the United States, is one of the largest non-profit scientific and educational institutions in the world. Its interests include geography, archaeology and natural science, the promotion of environmental and historical conservation, and the study of world culture and history. The National Geographic Society’s logo is a yellow portraitframe - rectangular in shape - which appears on the margins surrounding the front covers of its magazines and as its channel logo.

All content from Kiddle encyclopedia articles (including the article images and facts) can be freely used under Attribution-ShareAlike license, unless stated otherwise. Cite this article:
National Geographic Society Facts for Kids. Kiddle Encyclopedia.