Anne Morrow Lindbergh (née Anne Spencer Morrow; June 22, 1906 – February 7, 2001) was an American writer and aviator. She was married to Charles Lindbergh. She wrote poetry and non-fiction. She wrote about many different things. Lindbergh's Gift from the Sea was an important feminist book.

Anne Spencer Morrow was born on June 22, 1906 in Englewood, New Jersey. She was the second of four children. Her father was Dwight W. Morrow, a partner in J.P. Morgan & Co.. He became United States Ambassador to Mexico and United States Senator from New Jersey. Her mother, Elizabeth Reeve Cutter Morrow, was a poet, teacher, and acting president of Smith College.

Anne and Charles Lindbergh met on December 21, 1927, in Mexico City. Her father was Lindbergh's financial adviser at J. P. Morgan and Co.. He invited Lindbergh to Mexico in order to help create good relations between that country and the United States. Anne later wrote in her diary:

He is taller than anyone else—you see his head in a moving crowd and you notice his glance, where it turns, as though it were keener, clearer, and brighter than anyone else's, lit with a more intense fire. ... What could I say to this boy? Anything I might say would be trivial and superficial, like pink frosting flowers. I felt the whole world before this to be frivolous, superficial, ephemeral.

Anne Morrow and Charles Lindbergh married on May 27, 1929. The ceremony was a private one at her parents' home in Englewood, New Jersey.

That year, Anne flew a plane by herself for the first time. In 1930, she became the first American woman to earn a first-class glider pilot license. In the 1930s, Anne and Charles explored and charted air routes between continents. The Lindberghs were the first to fly from Africa to South America. They explored polar air routes from North America to Asia and Europe.

The Lindbergh's first child, Charles Augustus Lindbergh, Jr., was born on June 22, 1930. On March 1, 1932, he was kidnapped from their home in East Amwell, New Jersey and killed.

Because of the kidnapping of their son and other things, a lot of attention was paid to the Lindberghs. That made them decide to move. First they went to England. Later they went France.

While in Europe, the Lindberghs started to believe that the United States should not be involved with other countries. Many people disliked them because of that. Lindbergh thought the United States should not be involved in war in Europe. In 1940, Anne wrote a booklet called The Wave of the Future in support of her husband. The booklet became one of the most hated writings of the time. Anne also wrote about Hitler, saying that he was "a very great man, like an inspired religious leader—and as such rather fanatical—but not scheming, not selfish, not greedy for power."

In 1938, the Lindberghs moved back to the United States. They later had five more children: sons Jon, Land and Scott, and daughters Anne and Reeve.

After the war, Anne and Charles wrote books that made people think better of them again. Anne's 1955 book Gift from the Sea earned Anne's place as "one of the leading advocates of the nascent environmental movement". It became a national best seller.

During their 45-year marriage, Charles and Anne lived in New Jersey, New York, England, France, Maine, Michigan, Connecticut, Switzerland, and Hawaii. In the early 1950s, Anne had a three-year affair with her doctor. Charles died on Maui in 1974.

In the early 1990s, Anne had a series of strokes which left her confused and disabled. After that, she continued to live in her home in Connecticut with round-the-clock caregivers. In 1999, she came down with pneumonia, after which she went to live in a small home built on her daughter Reeve's Vermont farm. In 2001, at the age of 94, Anne died there from another stroke. Reeve Lindbergh's book, No More Words, tells the story of her mother's last years. 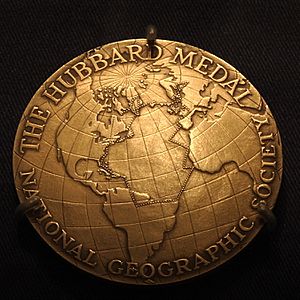 Lindbergh's first book, North to the Orient (1935) won a National Book Award for the Most Distinguished General Nonfiction of 1935. Her second book, Listen! The Wind (1938), won the same award. She received the Christopher Award for War Within and Without, the last book of her published diaries.

All content from Kiddle encyclopedia articles (including the article images and facts) can be freely used under Attribution-ShareAlike license, unless stated otherwise. Cite this article:
Anne Morrow Lindbergh Facts for Kids. Kiddle Encyclopedia.