William Healey Dall (August 21, 1845 – March 27, 1927) was an American naturalist, a prominent malacologist, and one of the earliest scientific explorers of interior Alaska. He described many mollusks of the Pacific Northwest of America, and was for many years America's preeminent authority on living and fossil mollusks.

Dall also made substantial contributions to ornithology, vertebrate and invertebrate zoology, physical and cultural anthropology, oceanography and paleontology. In addition he carried out meteorological observations in Alaska for the Smithsonian Institution.

Dall was born in Boston, Massachusetts. His father Charles Henry Appleton Dall, (1816–86), a Unitarian minister, moved in 1855 to India as a missionary. His family however stayed in Massachusetts, where Dall's mother Caroline Wells Healey was a teacher, transcendentalist, reformer, and pioneer feminist.

In 1862, Dall's father, on one of his few brief visits home, brought his son in contact with some naturalists at Harvard University, where he had studied, and in 1863, when Dall graduated from high school, he took a keen interest in mollusks. In 1863 he became a pupil of Louis Agassiz of Harvard's Museum of Comparative Zoology, in natural science. He encouraged Dall's interest in malacology, a field still in its infancy. He also studied anatomy and medicine under Jeffries Wyman and Dr. Daniel Brainerd. 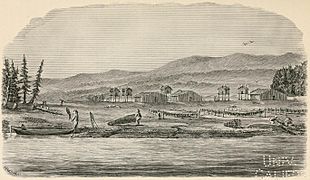 Village on the lower Yukon during fishing season, June 1868, from an original sketch by Dall 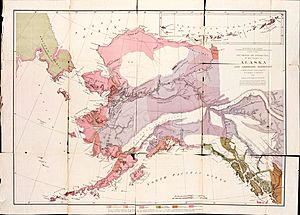 Dall's 1875 map showing the distribution of native tribes in Alaska 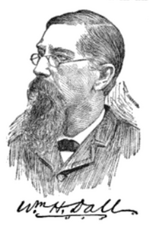 Dall took a job in Chicago. There he met the famous naturalist Robert Kennicott (1835–1866) at the Chicago Academy of Sciences Museum. In 1865 the Western Union Telegraph Expedition was mounted to find a possible route for a telegraph line between North America and Russia by way of the Bering Sea. Kennicott was selected as the scientist for this expedition, and with the influence of Spencer Fullerton Baird of the Smithsonian Institution, he took Dall as his assistant, because of his expertise in invertebrates and fish. Aboard the clipper Nightingale, under the command of the whaler and naturalist Charles Melville Scammon (1825–1911), Dall explored the coast of Siberia, with first several stops in Alaska (still Russian territory at that time). Scammon Bay, Alaska was named after Charles Scammon.

In 1866, Dall continued this expedition to Siberia. On a stop at St. Michael, Alaska, he was informed that Kennicott had died of a heart attack on May 13, 1866, while prospecting a possible telegraph route along the Yukon River. Set on finishing Kennicott's Yukon River work, Dall stayed on the Yukon during the winter. Because of cancellation of his own expedition, he had to continue this work at his own expense until autumn 1868. Meanwhile, in 1867, the U.S. had acquired Alaska from Russia for 7.2 million dollars. This was uncharted country, with a fauna and flora still waiting to be explored and described, a task Dall took upon himself as a surveyor-scientist.

Back at the Smithsonian in Washington, he started cataloguing the thousands of specimens he had collected during this expedition. In 1870 he published his account of his pioneering travels in Alaska and Its Resources, describing the Yukon River, the geography and resources of Alaska, and its inhabitants. Also in 1870, Dall was appointed Acting Assistant to the United States Coast Survey (renamed the United States Coast and Geodetic Survey in 1878).

Dall went on several more reconnaissance and survey missions to Alaska between 1871 and 1874. His official mission was to survey the Alaska coast, but he took the opportunity to acquire specimens, which he collected in great numbers. In 1871–72, he surveyed the Aleutian Islands. In 1874 aboard the U.S. Coast Survey schooner Yukon, he anchored in Lituya Bay, which he compared to Yosemite Valley in California, had it retained its glaciers.

He sent his collection of mollusks, echinoderms, and fossils to Louis Agassiz at Harvard's Museum of Comparative Zoology; plants went to Asa Gray at Harvard; archaeological and ethnological material went to the Smithsonian. In 1877–1878 he was associated with the Blake expeditions", along the East Coast of the United States. The major publications on the Blake Expeditions were published in the Bulletin of the Museum of Comparative Zoology Harvard.

Dall was in Europe in August 1878, sent to a meeting in Dublin of the British Association for the Advancement of Science. He took the opportunity to visit mollusk collections and meet European scholars.

Dall married Annette Whitney in 1880. They travelled to Alaska on their honeymoon. After arriving in Sitka, his wife went back home to Washington, D.C. He began his final survey season aboard the schooner Yukon. He was accompanied, among others, by the ichthyologist Tarleton Hoffman Bean (1846–1916).

In 1882 Dall contributed for the Republican Congressional Campaign Committee

In 1884, Dall left the U.S. Coast and Geodetic Survey, having already written over 400 papers. In 1885 he transferred to the newly created U.S. Geological Survey, obtaining a position as paleontologist. He was assigned to the U.S. National Museum as honorary curator of invertebrate paleontology, studying recent and fossil mollusks. He would hold this position until his death.

In 1899 he and an elite crew of scientists, such as the expert in glaciology John Muir, were members of the Harriman Alaska Expedition, aboard the S.S. George W. Elder, along the glacial fjords of the Alaska Coast, the Aleutian Islands and to the Bering Strait. Many new genera and species were described. Dall was the undisputed expert on Alaska, and the scientists aboard were often surprised by his erudition, both in biology and in respect to the cultures of the native Alaskan peoples. His contributions to the reports of the Harriman Alaska Expedition, include a chapter Description and Exploration of Alaska, and Volume 13, Land and Fresh-water Mollusks.

He spent two months at the Bishop Museum in Hawaii examining their shell collection.

He was elected member of most of the U.S. scientific societies, vice-president of American Academy of Arts and Sciences (AAAS) (1882, 1885), a founder of the National Geographic Society, and the Philosophical Society of Washington. In 1897 he was elected to the National Academy of Sciences. He was a Foreign Member of the Geological Society of London. His eminence also earned him several honorary degrees. Mount Dall, an 8,399-foot (2,560 m) peak in the Alaska Range, now in Denali National Park and Preserve, was named after Dall by A.H. Brooks of the U.S. Geological Survey in 1902.

Genera and species named in his honor

All content from Kiddle encyclopedia articles (including the article images and facts) can be freely used under Attribution-ShareAlike license, unless stated otherwise. Cite this article:
William Healey Dall Facts for Kids. Kiddle Encyclopedia.