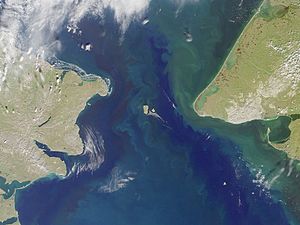 Satellite image of the Bering Strait.

The Bering Strait (Russian: Берингов пролив) is a sea strait between Cape Dezhnev, Russia, the easternmost point (169°43' W) of the Asian continent and Cape Prince of Wales on the edge of the Seward Peninsula, Alaska, the westernmost point (168°05' W) of the North American continent, with latitude of about 65° 40' north, slightly south of the Arctic Circle. The strait was made around 40,000 years ago, when an old landmass between Asia and America known as Beringia was flooded at the end of the last ice age.. The strait is passed through by the international date line, making from the view of the Russian side from the Alaskan side like looking at tomorrow.

The Bering Strait is 82 km at its narrowest point, and 90 meters deep at its deepest point (with an average depth of 50 meters), making the strait rather shallow. There are three small islands located in the strait. There are the two Diomede Islands in the middle of the strait, and a small rock (or islet) known as Fairway Rock southeast of the Diomede Islands.

There have been ideas of building a bridge or tunnel to link Alaska and Russia, where cars and trains could cross the strait. The crossing would have three parts, one connecting Big Diomede Island to Russia, one connecting Small Diomede with Alaska, and a final link between the islands. This would link the North American road system with the connected road systems of Asia, Europe, and Africa. There have not been any physical work done on such a crossing, mostly due to the remoteness of the strait, and the little demand for it. There are no major highways or railroads that connect the Bering Strait to the rest of Asia or America, so if either a tunnel or bridge was built across the strait, new connections to the rest of the highways and railways would have to be made for cars or trains to get there. The crossing might become more useful in the future however.

All content from Kiddle encyclopedia articles (including the article images and facts) can be freely used under Attribution-ShareAlike license, unless stated otherwise. Cite this article:
Bering Strait Facts for Kids. Kiddle Encyclopedia.