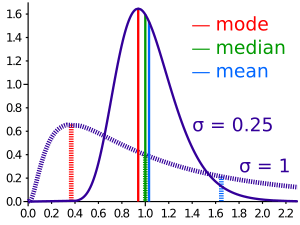 In math, an average is called a mean. It can be found by adding the numbers, then dividing the answer by the number of numbers there were. There are other kinds of mean, and other things that are sometimes thought of as "average" such as median or mode (statistics).

In some sports, such as cricket and baseball, averages are used to tell how good a player is (such as batting average). Sporting averages have special rules for how to find them.

All content from Kiddle encyclopedia articles (including the article images and facts) can be freely used under Attribution-ShareAlike license, unless stated otherwise. Cite this article:
Average Facts for Kids. Kiddle Encyclopedia.