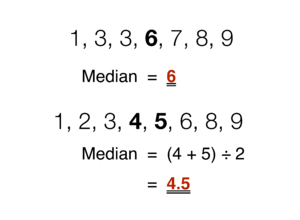 Finding the median in sets of data with an odd and even number of values.

In probability theory and statistics, the median is a number. This number has the property that it divides a set of observed values in two equal halves, so that half of the values are below it, and half are above.

. For example, if there are 13 values, they can be arranged into two groups of 6, with the median in between, at position 7. With an even number of values, as there is no single number which divides all of the numbers to two halves, the median is defined as the mean of the two central elements. With 14 observations, this would be the mean of elements 7 and 8, which is their sum divided by 2.

Alternatively, the median of an even-sized list is sometimes defined as either of the two middle elements; the choice being either (a) always the smallest one, (b) always the largest one, or (c) randomly choose between the two. This alternative definition has two important advantages: it guarantees that the median is always a list element (e.g., a list of integers will never have a fractional median), and it guarantees that the median exists for any ordinal-valued data. On the other hand, when one of the choices (a) or (b) is taken, the median of a sample will be biased, which is an unwanted property of a statistical estimator. Definition (c) does not have that disadvantage, but it is more difficult to do. It also has the disadvantage that the same list of values does not have a well-defined, deterministic median.

Distribution curve with mode, median and mean. Median is the middle.

Median and mean are different in several ways. Mean is a better measure in many cases, because many of the statistical tests can use mean and standard deviation of two observations to compare them, while the same comparison cannot be performed using the medians.

Another advantage of median is that it can be calculated sooner when we are studying survival data. For example, a researcher can calculate the median survival of patients with a kidney transplant, when half the patients participated in his study die. Calculate the mean survival requires continuing the study and following all the patients until their death.

The results change a lot when you have a bigger range of numbers. Let's imagine a different group of five people:

All content from Kiddle encyclopedia articles (including the article images and facts) can be freely used under Attribution-ShareAlike license, unless stated otherwise. Cite this article:
Median Facts for Kids. Kiddle Encyclopedia.