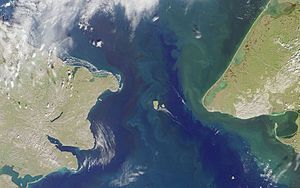 Satellite image of Bering Strait. Cape Dezhnev, Russia is on the left while Cape Prince of Wales, USA is on the right.

Located on the Seward Peninsula of the U.S. state of Alaska near the settlement of Wales, Cape Prince of Wales is the terminus of the Continental Divide, marking the division between the Pacific and Arctic coasts, as well as marking the limit between the Bering Sea and the Chukchi Sea. It is the eastern boundary of the Bering Strait, 51 miles (82 km) opposite Cape Dezhnev, and adjacent to the Diomede Islands and Fairway Rock.

All content from Kiddle encyclopedia articles (including the article images and facts) can be freely used under Attribution-ShareAlike license, unless stated otherwise. Cite this article:
Cape Prince of Wales Facts for Kids. Kiddle Encyclopedia.