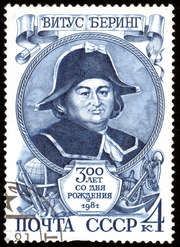 Postage stamp issued by the USSR in 1981 in honor of the 300th anniversary of the birth of Vitus Bering.

Vitus Jonassen Bering (1681 - 1741), also called Ivan Ivanovich Bering (Russian name) was a Danish seafarer and explorer. He went into the service of the Russian navy in 1704. He was commissioned a second lieutenant. During the Great Northern War he distinguished himself and was promoted to the rank of commander.

In 1639 a group of Russian promyshlenniki (hunter-traders) sailed from Russia into the Pacific ocean, They were the first Europeans to sailed between Asia and North America. Peter the great, Czar of Russia, wanted to send an expedition to confirm the information. In 1724 he sent the first Kamchatka expedition (1725-30) led by Bering. One of their tasks was to see if Siberia was connected to North America. They sailed first to the Kamchatka Peninsula where a ship was built for the exploration. In 1728 Bering sailed north far enough to discover that Siberia and North America (Alaska) were not connected.

The Second Kamchatka Expedition (1733-43) was a very large scientific expedition. It was also led by Bering. The scientific expedition sent out smaller explorations to chart the coasts of Siberia, the Pacific, and several research expeditions. Ships were sent to Japan and America to promote Russian interests. Bering reached Alaska in 1741. On the return journey they had to stop at Bering Island. While there nearly half the crew, including Bering, died. In 1991, Danish archaeologists found his grave.

All content from Kiddle encyclopedia articles (including the article images and facts) can be freely used under Attribution-ShareAlike license, unless stated otherwise. Cite this article:
Vitus Bering Facts for Kids. Kiddle Encyclopedia.