Sea of Azov facts for kids

The Sea of Azov is a sea in Eastern Europe connected to the Black Sea by the narrow (about 4 km or 2.5 mi) Strait of Kerch, and is sometimes regarded as a northern extension of the Black Sea. The sea is bounded in the northwest by Ukraine, in the southeast by Russia. The Don River and Kuban River are the major rivers that flow into it. There is a constant outflow of water from the Sea of Azov to the Black Sea.

The sea is largely affected by the inflow of numerous rivers, which bring sand, silt, and shells, which in turn form numerous bays, limans, and narrow spits. Because of these deposits, the sea bottom is relatively smooth and flat with the depth gradually increasing toward the middle. Also, due to the river inflow, water in the sea has low salinity and a high amount of biomass (such as green algae) that affects the water colour. Abundant plankton result in unusually high fish productivity. The sea shores and spits are low; they are rich in vegetation and bird colonies. 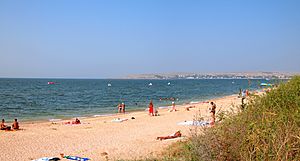 Beach in Shchyolkino in Crimea

The sea is relatively small and nearly surrounded by land. Therefore, its climate is continental with cold winters and hot and dry summers. In autumn and winter, the weather is affected by the Siberian Anticyclone which brings cold and dry air from Siberia with winds of 4–7 m/s, sometimes up to 15 m/s. Those winds may lower the winter temperatures from the usual −1 to −5 °C to below −30 °C. The mean mid-summer temperatures are 23–25 °C with a maximum of about 40 °C. Winds are weaker in summer, typically 3–5 m/s. Precipitation varies between 312 and 528 mm/year and is 1.5–2 times larger in summer than in winter.

Average water temperatures are 0–1 °C in winter (2–3 °C in the Kerch Strait) and 24–25 °C in summer, with a maximum of about 28 °C on the open sea and above 30 °C near the shores. During the summer, the sea surface is usually slightly warmer than the air. Because of the shallow character of the sea, the temperature usually lowers by only about 1 °C with depth, but in cold winters, the difference can reach 5–7 °C.

The winds cause frequent storms, with the waves reaching 6 metres in the Taganrog Bay, 2–4 metres near the southern shores, and 1 metre in the Kerch Strait. In the open sea, their height is usually 1–2 metres, sometimes up to 3 metres. Winds also induce frequent seiches – standing waves with an amplitude of 20–50 cm and lasting from minutes to hours. Another consequence of the winds is water currents. The prevailing current is a counterclockwise swirl due to the westerly and south-westerly winds. Their speed is typically less than 10 cm/s, but can reach 60–70 cm/s for 15–20 m/s winds. In the bays, the flow is largely controlled by the inflow of the rivers and is directed away from the shore. In the Kerch Strait, the flow is normally toward the Black Sea due to the predominance of northern winds and the water inflow from the rivers; its average speed is 10–20 cm/s, reaching 30–40 cm in the narrowest parts. Tides are variable but can peak at 5.5 metres. 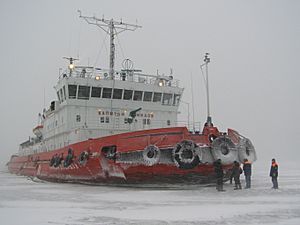 An icebreaker on the Sea of Azov

The shallowness and low salinity of the sea make it vulnerable to freezing during the winter. Fast ice bands ranging from 7 km in the north to 1.5 km in the south can occur temporarily at any time from late December to mid-March. Several ships were trapped in ice in 2012 when it froze over. The ice thickness reaches 30–40 centimetres (12–16 in) in most parts of the sea and 60–80 cm in the Taganrog Bay. The ice is often unstable and piles up to the height of several metres. Before the introduction of icebreakers, navigation was halted in the winter.

Historically, the sea has had rich marine life, both in variety, with over 80 fish and 300 invertebrate species identified, and in numbers. Consequently, fishing has long been a major activity in the area. The annual catch of recent years was 300,000 tonnes, about half of which are valuable species (sturgeon, pike-perch, bream, sea-roach, etc.). This was partly due to extremely high biological productivity of the sea, which was stimulated by the strong supply of nutrients from numerous rivers feeding the sea, low water salinity, ample heating due to shallow waters and long vegetation period. However, diversity and numbers have been reduced by artificial reduction of river flow (construction of dams), over-fishing and water-intense large-scale cultivation of cotton, causing increasing levels of pollution. Fish hauls have rapidly decreased and in particular anchovy fisheries have collapsed. 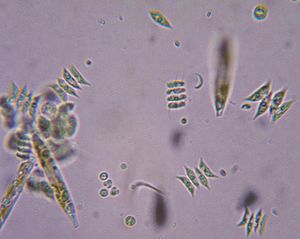 Green algae (and other plankton species) are mostly responsible for the colour of the Sea of Azov waters.

Because of the shallow waters, the development of aquatic life in the Sea of Azov is more characteristic of a lagoon, and the plankton patterns are rather similar in the open sea and near the shores. Despite its shallowness, the water has low transparency, so bottom plants are poorly developed and most algae are of planktonic type. The sea is characterised by high concentrations of organic matter and long blooming periods. Another specific feature of the sea is the variable salinity – low in the large bays and higher in the open sea, especially near the Kerch Strait. Therefore, the plankton species are distributed inhomogeneously in the Sea of Azov. Although many additional species are brought in from the saltier Black Sea, most of them cannot adjust to the variable salinity of the Sea of Azov, except for the euryhaline species. About 600 species of planktonic algae are known in the Sea of Azov. The number of species is dominated by diatoms and green algae; blue-green algae and pyrophites are significant, and euglena and yellow-green algae form only 5% of the species. Green algae are mostly responsible for the colour of the sea in the satellite images (see photos above).

Regarding zooplankton, the fresh waters of the Tanganrog Bay are inhabited by cladocera, copepoda and rotifers, such as Brachionus plicatilis, Keratella curdata and Asplanchna. Western part of the sea, which is more saline, hosts three forms of Acartia clausi, as well as Centropages ponticus, meroplankton and larvae of gastropoda, bivalvia and polychaete.

Benthos species reside mostly at the sea bottom and include worms, crustaceans, bottom protists, coelenterata and mollusks. Mollusks account for 60–98% of the invertebrate biomass at the Sea of Azov bottom. 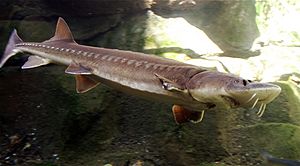 Sturgeons are among the major and most valuable commercial fish species of the Sea of Azov.

There are 183 ichthyofauna species from 112 genera and 55 families in the Sea of Azov region. Among them, there are 50 rare and 19 endangered species, and the sturgeon Acipenser nudiventris is probably extinct in the region.

The fauna of the freshwater Taganrog Bay is much poorer – it consists of 55 species from 36 genera and 16 families; among them, three species are rare and 6 are endangered. 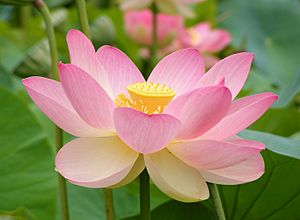 The shores of the Sea of Azov contain numerous estuaries and marshes and are dominated by reeds, sedges, Typha and Sparganium. Typical submerged plants are Charales, pond weed, hornworts and water lilies. Also common is sacred lotus. The number of species is large; for example, the Belosaraysk and Berdyansk spits alone contain more than 200 each. Some spits are declared national nature reserves, such as Beglitsk, Belosaraysk, Krivaya and Berdyansk Spits. 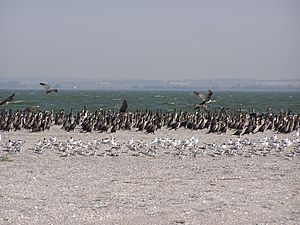 Great cormorants and seagulls on the Belosaraysk Spit.

Estuaries and spits of the sea are rich in birds, mostly waterfowl, such as wild geese, ducks and seagulls. Colonies of cormorants and pelicans are common. Also frequently observed are swans, herons, sandpipers and many birds of prey. Mammals include foxes, wild cats, hares, hedgehogs, weasels, martens and wild boar. Muskrats were introduced to the area in the early 20th century and are hunted for their fur. 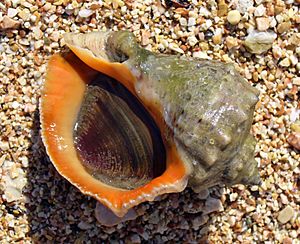 Rapana venosa from the Black Sea.

Balanus improvisus is the first benthos species which spread from the Black Sea in the early 20th century and settled in the Sea of Azov. Its current density is 7 kg/m2. From 1956, Rapana venosa is observed in the Sea of Azov, but it could not adjust to low salinity and therefore is limited to the neighborhood of the Kerch Strait. Several Sea of Azov mollusks, such as shipworm (Teredo navalis), soft-shell clam (Mya arernaria), Mediterranean mussel (Mytilus galloprovincialis) and Anadara inaequivalvis, originate from the Black Sea. Another example of invading species is the Dutch crab Rhithropanopeus harrisii which is observed both in saline and freshwater parts.

Formerly three types of dolphins, short-beaked common dolphin, common bottlenose dolphin and harbour porpoise, regularly visited the Sea of Azov from the Black Sea although the common dolphin usually avoided the basin and Kerch Strait due to low salinity. One type of harbour porpoise, Phocoena phocoena relicta, used to live in the Sea of Azov and was therefore called "Azov dolphin" (Russian: азовка) in the Soviet Union. Nowadays, dolphins are rarely observed in the Sea of Azov. This is attributed to shallowing of the sea, increasing navigation activities, pollution, and reduction in the fish population.

Various species of pinnipeds and belugas were introduced into Black Sea by mankind and later escaped either by accidental or purported causes. Of these, grey seal has been recorded within Kerch Strait and Sea of Azov. Mediterranean monk seals became extinct in the Black Sea in 1997, and historic presences of large whales such as minke whales into Black Sea is recorded, although it is unclear whether these mammals historically occurred in the Azov Basin.

All content from Kiddle encyclopedia articles (including the article images and facts) can be freely used under Attribution-ShareAlike license, unless stated otherwise. Cite this article:
Sea of Azov Facts for Kids. Kiddle Encyclopedia.