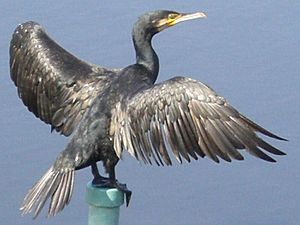 The great cormorant (Phalacrocorax carbo), is a member of the cormorant family of seabirds. It is a large black bird which breeds in much of the Old World and the Atlantic coast of North America. There is a lot of variation in its size in different parts of the world.Weight is reported to vary from 1.5 kg (3.3 lb) to 5.3 kg (12 lb). 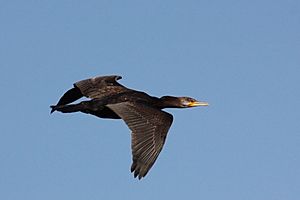 The great cormorant is a large black bird, but there is a wide variation in size in the species wide range.

They are tied as the second largest extant species of cormorant after the flightless cormorant, with the Japanese cormorant averaging at a similar size.

In bulk if not in linear dimensions, the Blue-eyed shag species complex of the Southern Oceans are scarcely smaller at average.

It has a longish tail and yellow throat-patch. Adults have white patches on the thighs and on the throat in the breeding season. In European waters it can be distinguished from the common shag by its larger size, heavier build, thicker bill, lack of a crest and plumage without any green tinge. In eastern North America, it is similarly larger and bulkier than double-crested cormorant, and the latter species has more yellow on the throat and bill and lack the white thigh patches frequently seen on great cormorants.

Great cormorants are mostly silent, but they make various guttural noises at their breeding colonies. 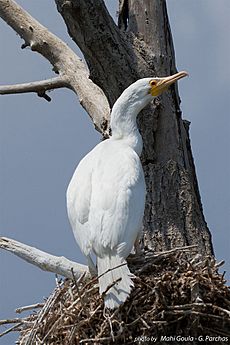 A very rare variation of the great cormorant is caused by albinism. The Phalacrocorax carbo albino suffers from loss of eyesight and/or hearing, thus it rarely manages to survive in the wild.

This is a very common and widespread bird species. It feeds on the sea, in estuaries, and on freshwater lakes and rivers. Northern birds migrate south and winter along any coast that is well-supplied with fish.

In Serbia, the cormorant lives in Vojvodina. However, after 1945 many artificial lakes were formed in Serbia; some of them became potential habitats for cormorants. Currently, on the Lake Ćelije, formed in 1980, there is a resident colony of cormorants, who nest there and are present throughout the year, except January–February 1985 and February 2012 when the lake surface was completely frozen.

The type subspecies, P. c. carbo, is found mainly in Atlantic waters and nearby inland areas: on western European coasts and south to North Africa, the Faroe Islands, Iceland and Greenland; and on the eastern seaboard of North America, though in America it breeds only in the north of its range, in the Canadian maritime provinces. The subspecies P. c. novaehollandiae is found in Australian waters. 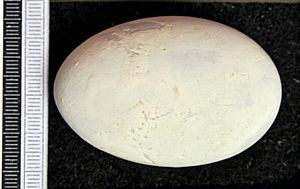 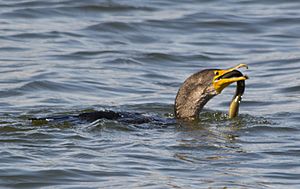 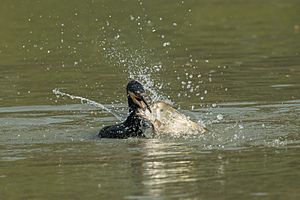 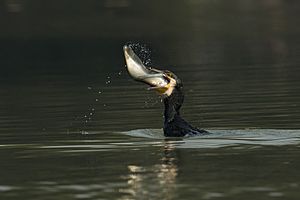 The great cormorant often nests in colonies near wetlands, rivers, and sheltered inshore waters. Pairs will use the same nest site to breed year after year. It builds its nest, which is made from sticks, in trees, on the ledges of cliffs, and on the ground on rocky islands that are free of predators.

This cormorant lays a clutch of three to five eggs that measure 63 by 41 millimetres (2.5 by 1.6 in) on average. The eggs are a pale blue or green, and sometimes have a white chalky layer covering them. These eggs are incubated for a period of about 28 to 31 days.

The great cormorant feeds on fish caught through diving. This bird feeds primarily on wrasses, but it also takes sand smelt and common soles. The average weight of fish taken by great cormorants increased with decreasing air and water temperature, being 30 g during summer, 109 g during a warm winter and 157 g during the cold winter (all values for non-breeding birds). Cormorants consume all fish of appropriate size that they are able to catch in summer and noticeably select for larger, mostly torpedo-shaped fish in winter. Thus, the winter elevation of foraging efficiency described for cormorants by various researchers is due to capturing larger fish not due to capturing more fish. In some freshwater systems, the losses of fish due to overwintering great cormorants were estimated to be up to 80 kg per ha each year (e.g. Vltava River, Czech Republic).

This cormorant forages by diving and capturing its prey in its beak. The dives it go on last around 28 seconds, with the bird diving to depths of about 5.8 metres (19 ft). About 60% of dives are to the benthic zone and about 10% are to the pelagic zone, with the rest of the dives being to zones in between the two.

Many fishermen see in the great cormorant a competitor for fish. Because of this, it was hunted nearly to extinction in the past. Thanks to conservation efforts, its numbers increased. At the moment, there are about 1.2 million birds in Europe (based on winter counts; late summer counts would show higher numbers). Increasing populations have once again brought the cormorant into conflict with fisheries. 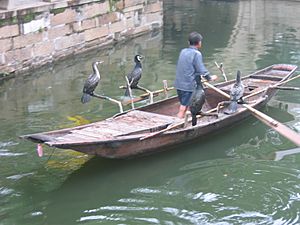 Cormorant fishing is practised in China, Japan, and elsewhere around the globe. In it, fishermen tie a line around the throats of cormorants, tight enough to prevent swallowing, and deploy them from small boats. The cormorants catch fish without being able to fully swallow them, and the fishermen are able to retrieve the fish simply by forcing open the cormorants' mouths, apparently engaging the regurgitation reflex.

In Norway, cormorant is a traditional game bird. Each year c. 10,000 cormorants are shot to be eaten. In North Norway, cormorants are traditionally seen as semi-sacred. It is regarded as good luck to have cormorants gather near your village or settlement. An old legend states that people who die far out at sea, their bodies never recovered, spend eternity on the island Utrøst – which can only occasionally be found by mortals. The inhabitants of Utrøst can only visit their homes in the shape of cormorants.

All content from Kiddle encyclopedia articles (including the article images and facts) can be freely used under Attribution-ShareAlike license, unless stated otherwise. Cite this article:
Great cormorant Facts for Kids. Kiddle Encyclopedia.