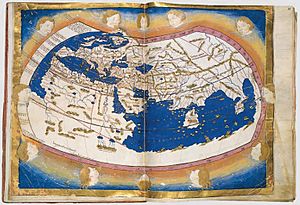 Old World is a term about the world before Christopher Columbus.

Spain sent Columbus to go to the New World. They found Native Americans, and then they became friends and traded.

They had foods and animals Native Americans had not seen before, like sugarcane, pigs, horses, and more. But, they did not know that they were also giving sickness. They accidentally killed many Native Americans. But, they did also kill many of them on purpose, so that it would be easier to build their new cities.

All content from Kiddle encyclopedia articles (including the article images and facts) can be freely used under Attribution-ShareAlike license, unless stated otherwise. Cite this article:
Old World Facts for Kids. Kiddle Encyclopedia.