Marco Polo (1254 - January 8, 1324) was a Venetian trader and explorer who, together with his father Niccolò and his uncle Maffeo, was one of the first Westerners to travel the Silk Road to China (which he called Cathay) and visited the Great Khan of the Mongol Empire, Kublai Khan (grandson of Genghis Khan). His travels are written down in Il Milione (The Million or The Travels of Marco Polo).

The Voyage of Niccolò and Maffeo Polo

The Polo name originally did not belong to a family of explorers but to a family of traders. Marco Polo's father, Niccolò (also Nicolò in Venetian) and his uncle, Maffeo (also Maffio), were prosperous merchants who traded with the East. They were partners with a third brother, named Marco il vecchio (the Elder).

Niccolò and Maffeo Polo set out to Asia in 1255 and reached China in 1266, arriving at Khanbaliq near Peking. They returned from China as Kublai Khan's envoys with a letter for the Pope. This letter asked the Pope to send educated people to teach in Kublai Khan's empire and to inform the Mongols about their way of life. Kublai Khan was the Great Khan of the Mongol Empire and a grandson of Genghis Khan.

In 1269, Niccolò and Maffeo returned to their families in Venice, meeting 15-year old Marco for the first time.

Marco Polo was born around 1254 in Venice, capital of the Venetian Republic. His father, merchant Niccolò Polo, had his household in Venice and left Marco's pregnant mother in order to travel to Asia with his brother Maffeo Polo.

Almost nothing is known about the childhood of Marco Polo until he was fifteen years old, except that he probably spent part of his childhood in Venice. Meanwhile, Marco Polo's mother died, and an aunt and uncle raised him. He received a good education, learning trade subjects including foreign currency, appraisal, and the handling of cargo ships. He learned little or no Latin.

Journey to China and Service to the Khan 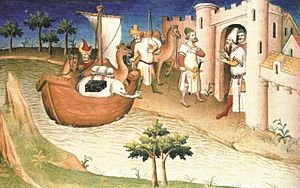 The Polo family arrives in a Chinese city

Maffeo and Niccolò Polo set out on a second journey with the Pope's response to Kublai Khan in 1271. This time Niccolò took his son, Marco, along with two friars who did not finish the voyage due to fear.

The Polos spent the next 17 years in China. Impressed by Marco's intelligence and humility, Khan appointed him to serve as his foreign emissary to India and Burma. He was sent on many diplomatic missions throughout his empire and in Southeast Asia (such as in present-day Indonesia, Sri Lanka, and Vietnam), but also entertained the Khan with stories and observations about the lands he saw. As part of this appointment, Marco did much traveling inside China since he lived in the emperor's lands for 17 years.

Kublai refused several times to let the Polos return to Europe because he enjoyed their company and they became useful to him. However, around 1291, he finally granted the Polos permission to return home, entrusting them with their last duty: accompany the Mongol princess Kököchin, who was to become the wife of Arghun Khan in Persia. After leaving the princess in Persia, the Polos traveled to Constantinople. They later decided to return to their home. 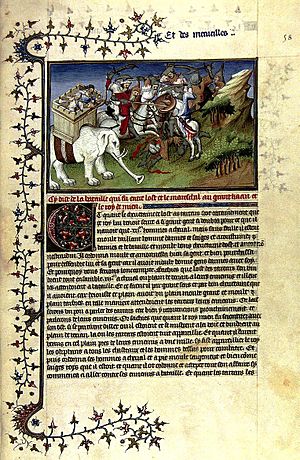 A page from a manuscript of "Il Milione"

On their return from China in 1295, the family settled in Venice where they became a sensation and attracted crowds of listeners who had difficulty believing their reports of distant China. According to a late tradition, since many listeners did not believe him, Marco Polo invited them to dinner one night during which the Polos dressed in the simple clothes of a peasant in China. Shortly before the crowd ate, the Polos opened their pockets to reveal hundreds of rubies and other jewels which they had received in Asia. Though they were impressed, many in Venice still doubted the Polos.

Marco Polo was later captured in a minor clash in the war between Venice and Genoa. He spent the few months of his imprisonment in 1298 dictating to a fellow prisoner, Rustichello da Pisa, a detailed account of his travels in the then-unknown parts of the Far East.

His book, Il Milione (the title comes from either "The Million", then considered a gigantic number, or from Polo's family nickname Emilione), was written in Old French and entitled Le divisament dou monde (The Description of the World). The book was soon translated into many European languages and is known in English as The Travels of Marco Polo. The original copy has been lost and there are now several often-conflicting versions of the translations. The book became an instant success, which was quite an achievement, considering that it was written before the invention of the printing press. 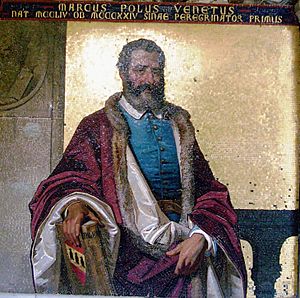 Marco Polo was finally released from captivity in the summer of 1299, and he returned home to Venice, where his father and uncles had bought a large house in the central quarter named contrada San Giovanni Grisostomo with the company's profits.

The company continued its activities, and Marco was now a wealthy merchant. While he personally financed other expeditions, he would never leave Venice again. In 1300, he married Donata Badoer, a woman from an old, noble family. Marco fathered three children with her: Fantina, Bellela, and Moreta. All of them later married into noble families.

Between 1310 and 1320, he wrote a new version of his book, Il Milione, in Italian. The text was lost, but not before a Franciscan friar, named Francesco Pipino, translated it into Latin. This Latin version was then translated back into Italian, creating conflicts between different editions of the book.

Marco Polo died in his home on January 8, 1324, at almost 70 years old. He was buried in the Church of San Lorenzo. 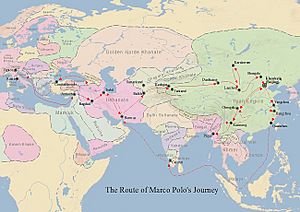 According to a famous story, when Marco was on his deathbed, a priest begged him to confess that he had lied in his stories. Marco refused, insisting, "I have not told half of what I saw!" This anecdote is an example of the skepticism that surrounded Marco's tales during his life.

In recent times, while most historians believe Marco Polo did reach China, some have proposed that he did not get that far and only retold information he had heard from others. Those skeptics point out that among other omissions, his account fails to mention Chinese writing, chopsticks, tea or the Great Wall (although in the last case, this should not be surprising given that the wall was not built at its present location until the Ming Dynasty). Also, Chinese records of the time do not mention him, despite the fact that he claimed to have served as a special emissary for Kublai Khan. This is puzzling, given the careful record-keeping in China at that time. 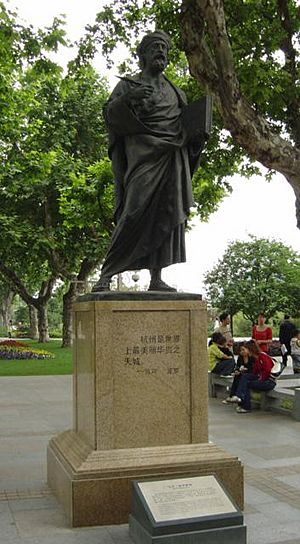 On the other hand, Marco describes other aspects of Far Eastern life in much detail: paper money, the Grand Canal, the structure of a Mongol army, tigers, and the Imperial postal system. He also refers to Japan by its Chinese name "Zipang" or "Cipangu." This is usually considered the first mention of Japan in Western literature. However, it is possible that Marco heard of these things from Arab silk road traders. Trade between the Middle East and the Far East was flourishing and travelers were often happy to retell stories of their ventures in great detail.

In his defense, there are no known arguments today that refute any of Marco's written descriptions. Additionally, Marco gives a detailed account of accompanying an embassy from China to the Khan of Persia and of the delivery of Princess Kököchin for marriage to the Khan. This mission is mentioned both in the Chinese and Persian records, including the names of the envoys, but Marco provides additional information about the journey which could only have been known by his being present on the trip.

Marco Polo is also believed to have described a bridge that later was the site of the Marco Polo Bridge Incident, a battle that marked the beginning of the Sino-Japanese War. 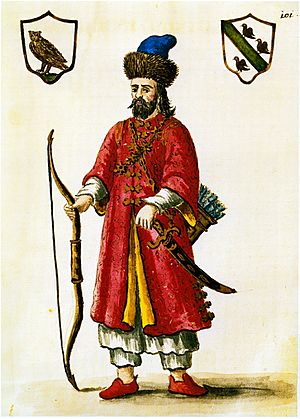 Although the Polos were by no means the first Europeans to reach China by land (for example, Radhanites and Giovanni da Pian del Carpine), thanks to Marco's book, their trip was best-documented and thus the first to be widely known.

Marco Polo's description of the Far East and its riches inspired Christopher Columbus's decision to try to reach those lands by a western route. A heavily annotated copy of Polo's book was among the belongings of Columbus.

Legend has it that Marco Polo introduced Italy to some products from China, including ice cream, the piñata, and pasta, especially spaghetti.

The travels of Marco Polo are given an extended fantasy treatment in the Irish writer Donn Byrne's Messer Marco Polo. He also appears as the pivotal character in Italo Calvino's novel Invisible Cities. 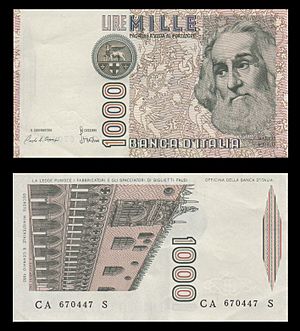 The tourism authorities of Korčula advertise it as the home of Marco Polo, based on a later tradition that places the Polo family in the Dalmatian town of Šibenik, later moving to Korčula and then Venice. Some authorities maintain that the Polos lived in Venice since the 11th century. Marco never mentioned his birthplace, nor did he write about the history of the Polo family. The issue is still being debated.

A species of sheep called the Marco Polo sheep is named for the explorer, who described it during his crossing of Pamir (ancient Mount Imeon) in 1271.

Marco Polo's travels may have had some impact on the development of European cartography, ultimately leading to the European voyages of exploration a century later. The 1453 Fra Mauro map (famous map of the world) is said to have been an improved copy of the one brought from China by Marco Polo. 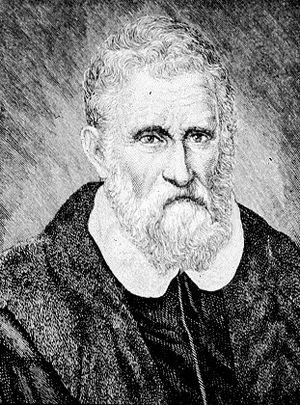 Portrait of Marco Polo in his older years

Why is Marco Polo so famous?
He was a famous merchant who wrote about his travels. The Western world were fascinated by them, especially his travels in Asia.

How old would Marco Polo be today?
Marco would be 767 years old today.

What did Marco Polo discover?
Marco Polo was not the first European to travel to Asia. However, though reading about his travels, Europeans were able to learn about Asia and its people, customs and were introduced to technology such as the use of coal, paper money, gunpowder, porcelain, and the invention of the compass.

How did Marco Polo change the world?
He opened up trade routes to East India and China.

What cities did Marco Polo visit?
Marco Polo visited many cities. Some examples of cities he visited in China are Dadu (where Beijing is located today) Xanadu (Shangdu) Xi'an, and Hangzhou.

All content from Kiddle encyclopedia articles (including the article images and facts) can be freely used under Attribution-ShareAlike license, unless stated otherwise. Cite this article:
Marco Polo Facts for Kids. Kiddle Encyclopedia.