Ancona is a city and a seaport in the Marche region in central Italy, with a population of around 101,997 as of 2015[update]. Ancona is the capital of the province of Ancona and of the region.

The city is located 280 km (170 mi) northeast of Rome, on the Adriatic Sea, between the slopes of Monte Conero, Monte Astagno and Monte Guasco.

Ancona is one of the main ports on the Adriatic Sea, especially for passenger traffic, and is the main economic center of the region. 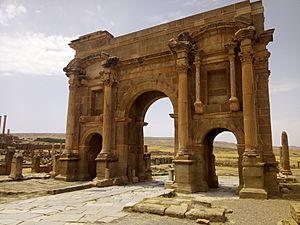 Ancona was founded by Greek settlers from Syracuse in about 387 BC, who gave it its name: Ancona which stems from the Greek word (Ankṓn), meaning "elbow"; the harbor to the east of the town was originally protected only by the headland on the north, shaped like an elbow.

Greek merchants established a Tyrian purple dye factory here. In Roman times it kept its own coinage with the head of Aphrodite on it, and continued the use of the Greek language.

When it became a Roman town is uncertain. It was occupied as a naval station in the Illyrian War of 178 BC. Julius Caesar took possession of it immediately after crossing the Rubicon. Its harbor was of considerable importance in imperial times.

Ancona was successively attacked by the Goths, Lombards and Saracens between the 3rd and 5th centuries, but recovered its strength and importance. It was one of the cities of the Pentapolis of the Exarchate of Ravenna, a lordship of the Byzantine Empire, in the 7th and 8th centuries. In 840, Saracen raiders sacked and burned the city. 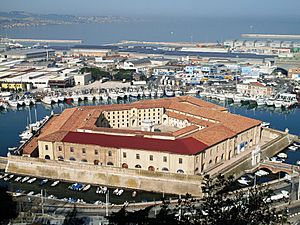 The Lazzaretto after renovation

After 1000, Ancona became increasingly independent, eventually turning into an important maritime republic and was was ruled by six Elders. In 1137, 1167 and 1174 it was strong enough to push back the forces of the Holy Roman Empire. Their ships took part in the Crusades.

Together with Rome, and Avignon, Ancona was the sole city in the Papal States in which the Jews were allowed to stay after 1569, living in the ghetto built in 1555.

Ancona, as well as Venice, became a very important destination for merchants from the Ottoman Empire during the 16th century. The Greeks formed the largest of the communities of foreign merchants. They were refugees from former Byzantine or Venetian territories that were occupied by the Ottomans in the late 15th and 16th centuries.

The first Greek community was established in Ancona early in the 16th century. 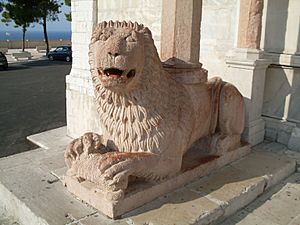 Lion statue at the Ancona Cathedral 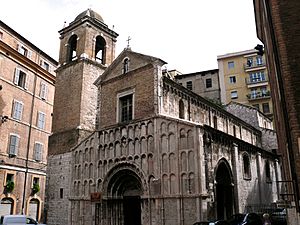 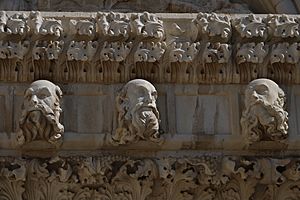 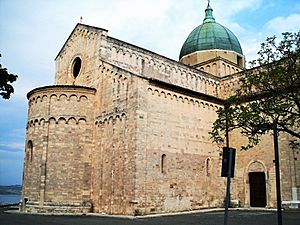 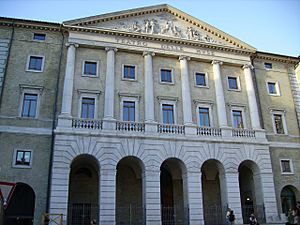 The The National Archaeological Museum is housed in the Palazzo Ferretti, it was built in the late Renaissance period, it is divided into four sections: 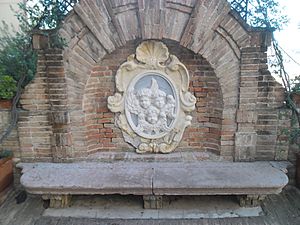 The Municipal Art Gallery Pinacoteca Civica Francesco Podesti is housed in the Palazzo Bosdari, reconstructed between 1558 and 1561.

Ancona is twinned with:

All content from Kiddle encyclopedia articles (including the article images and facts) can be freely used under Attribution-ShareAlike license, unless stated otherwise. Cite this article:
Ancona Facts for Kids. Kiddle Encyclopedia.