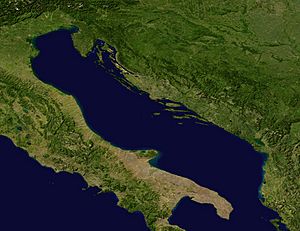 The Adriatic Sea is a body of water and is a part of the Mediterranean Sea. The Italian Peninsula from the Balkan Peninsula was sepatated by the sea. Countries that have a coastline in the Adriatic Sea are Italy, Slovenia, Croatia, Bosnia and Herzegovina, Montenegro and Albania.