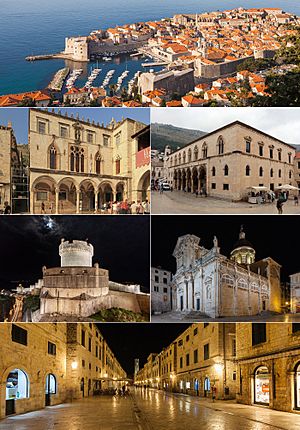 the walled city of Dubrovnik (Ragusa) 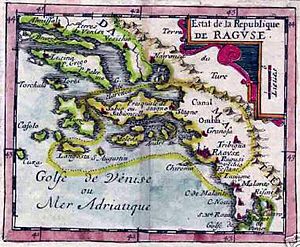 Map of the Republic of Ragusa

Dubrovnik is a city in Croatia on the Dalmatian coast. More than 500 years ago it was called "Ragusa". The Italian name of the city is still "Ragusa"; this sometimes leads to confusion because there is already a city named Ragusa on Sicily. It is on the Adriatic Sea. About 50,000 people lived there in 2001. Because of its age and unique buildings, the old city of Dubrovnik has been declared a UNESCO World Heritage Site.

The old city of Ragusa was started by Greeks who left Illirya after their home was invaded in the sixth century. They had been part of the Holy Roman Empire. Ragusa in Dalmatia grew to be an important country on the sea, called the Republic of Ragusa. This republic lasted until Napoleonic times.

Ragusa was once the only city in Dalmatia with Roman influence not to be controlled by the Republic of Venice. After the Middle Ages more and more Croats and Serbs from inland areas of Bosnia-Herzegovina moved to the area. They had started the neighbouring town of Dubrovnik, which eventually joined Ragusa. The original population (the Dalmatian Italians) was reduced to the few people of the ruling class: in the 19th century nearly all the people living in Ragusa were Slavs (Croats and Serbs). Ragusa officially changed its name to "Dubrovnik" (a Croatian name) after 1918, when the city became part of the newly-created country of Yugoslavia.

Today Dubrovnik is one of the main tourist sites in Croatia. Dubrovnik is famous for its Old Town - this is an ancient fortress with large stone walls, which helped Dubrovnik keep its freedom for many centuries. There was a major earthquake in 1667 that destroyed many buildings, but the people living there were able to rebuild the town.

The annual Dubrovnik Summer Festival is a 45-day-long cultural event with live plays, concerts, and games. It has been awarded a Gold International Trophy for Quality (2007) by the Editorial Office in collaboration with the Trade Leaders Club.

The patron saint of the city is Sveti Vlaho (Saint Blaise), whose statues are seen around the city. He has an importance similar to that of St. Mark the Evangelist to Venice. One of the larger churches in city is named after Saint Blaise. February 3 is the feast of Sveti Vlaho (Saint Blaise), who is the city's patron saint. Every year the city of Dubrovnik celebrates the holiday with Mass, parades, and festivities that last for several days. 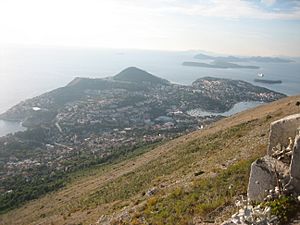 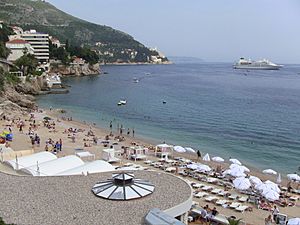 The Old Town of Dubrovnik is depicted on the reverse of the Croatian 50 kuna banknote, issued in 1993 and 2002.

The city boasts of many old buildings, such as the Arboretum Trsteno, the oldest arboretum in the world, dating back to before 1492. Also, the third oldest European pharmacy is located in the city, which dates back to 1317 (and is the only one still in operation today). It is located at Little Brothers monastery in Dubrovnik.

In history, many Conversos (Marranos) were attracted to Dubrovnik, formerly a considerable seaport. In May 1544, a ship landed there filled exclusively with Portuguese refugees, as Balthasar de Faria reported to King John. Another admirer of Dubrovnik, George Bernard Shaw, visited the city in 1929 and said: "If you want to see heaven on earth, come to Dubrovnik."

In the bay of Dubrovnik is the 72-hectare (180-acre) wooded island of Lokrum, where according to legend, Richard the Lionheart, King of England, was cast ashore after being shipwrecked in 1192. The island includes a fortress, botanical garden, monastery and naturist beach.

Among the many tourist destinations are a few beaches. Banje, Dubrovnik's main public beach, is home to the Eastwest Beach Club. There is also Copacabana Beach, a stony beach on the Lapad peninsula, named after the popular beach in Rio de Janeiro.

Dubrovnik has also been mentioned in popular film and theatre. In the 1997 film 20,000 Leagues Under the Sea with Michael Caine, one of the characters said to have been dreaming of fairy from Dubrovnik (motive known from local legends and literature). 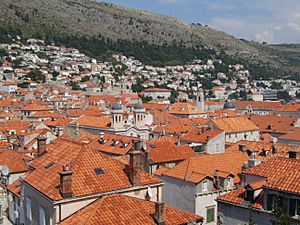 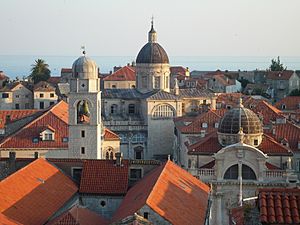 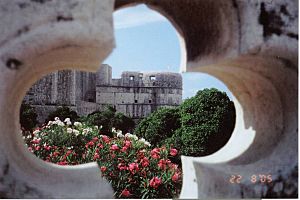 Aerial view of Dubrovnik from the southwest

Few of Dubrovnik's Renaissance buildings survived the earthquake of 1667 but fortunately enough remained to give an idea of the city's architectural heritage. The finest Renaissance highlight is the Sponza Palace which dates from the 16th century and is currently used to house the National Archives. The Rector's Palace is a Gothic-Renaissance structure that displays finely carved capitals and an ornate staircase. It now houses a museum. Its façade is depicted on the reverse of the Croatian 50 kuna banknote, issued in 1993 and 2002. The St. Saviour Church is another remnant of the Renaissance period, next to the much-visited Franciscan Church and Monastery. The Franciscan monastery's library possesses 30,000 volumes, 216 incunabula, 1,500 valuable handwritten documents. Exhibits include a 15th-century silver-gilt cross and silver thurible, and an 18th-century crucifix from Jerusalem, a martyrology (1541) by Bemardin Gucetic and illuminated psalters.

Dubrovnik's most beloved church is St Blaise's church, built in the 18th century in honour of Dubrovnik's patron saint. Dubrovnik's Baroque Cathedral was built in the 18th century and houses an impressive Treasury with relics of Saint Blaise. The city's Dominican Monastery resembles a fortress on the outside but the interior contains an art museum and a Gothic-Romanesque church. A special treasure of the Dominican monastery is its library with 216 incunabula, numerous illustrated manuscripts, a rich archive with precious manuscripts and documents and an extensive art collection.

The Neapolitan architect and engineer Onofrio della Cava completed the aqueduct with two public fountains, both built in 1438. Close to the Pile Gate stands the Big Onofrio's Fountain in the middle of a small square. It may have been inspired by the former Romanesque baptistry of the former cathedral in Bunić Square. The sculptural elements were lost in the earthquake of 1667. Water jets gush out of the mouth of the sixteen mascarons. The Little Onofrio's Fountain stands at the eastern side of the Placa, supplying water the market place in the Luža Square. The sculptures ware made by the Milanese artist Pietro di Martino (who also sculpted the ornaments in the Rector's Palace and made a statue – now lost – for the Franciscan church).

The 31-metre-high (102 ft) bell tower, built in 1444, is one of the symbols of the free city state of Ragusa. It was built by the local architects Grubačević, Utišenović and Radončić. It was rebuilt in 1929 as it had lost its stability through an earthquake and was in danger of falling. The brass face of the clock shows the phases of the moon. Two human figures strike the bell every hour. The tower stands next to the House of the Main Guard, also built in Gothic style. It was the residence of the admiral, commander-in-chief of the army. The Baroque portal was built between 1706 and 1708 by the Venetian architect Marino Gropelli (who also built St Blaise's church).

The Republic of Ragusa, as Dubrovnik was then named, erected in 1418 the statue of Roland (Ital. Orlando) as a symbol of loyalty to Sigismund of Luxembourg (1368–1437), King of Hungary and Croatia (as of 1387), Prince-Elector of Brandenburg (between 1378 and 1388 and again between 1411 and 1415), German King (as of 1411), King of Bohemia (as of 1419) and Emperor of the Holy Roman Empire (as of 1433), who helped by a successful war alliance against Venice to retain Ragusa's independence. It stands in the middle of Luža Square. Roland statues were typical symbols of city autonomy or independence, often erected under Sigismund in his Electorate of Brandenburg. In 1419 the sculptor Bonino of Milano, with the help of local craftsmen, replaced the first Roland with the present Gothic statue. Its forearm was for a long time the unit of measure in Dubrovnik: one ell of Dubrovnik is equal to 51.2 cm (20.2 in).

A feature of Dubrovnik is its walls (1.1 million visitors in 2016) that run almost 2 kilometres (1.2 miles) around the city. The walls are 4 to 6 metres (13–20 feet) thick on the landward side but are much thinner on the seaward side. The system of turrets and towers were intended to protect the vulnerable city. The walls of Dubrovnik have also been a popular filming location for the fictional city of King's Landing in the HBO television series, Game of Thrones. 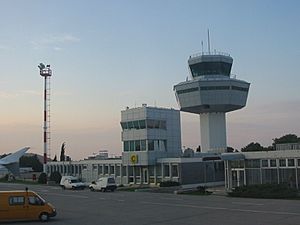 Dubrovnik Airport is the third busiest airport in Croatia.

Dubrovnik has an international airport of its own. It is located approximately 20 km (12 mi) southeast of Dubrovnik city centre, near Čilipi. Buses connect the airport with the Dubrovnik old main bus station in Gruž. In addition, a network of modern, local buses connects all Dubrovnik neighbourhoods running frequently from dawn to midnight. However, Dubrovnik, unlike Croatia's other major centres, is not accessible by rail; until 1975 Dubrovnik was connected to Mostar and Sarajevo by a narrow gauge railway (760 mm) built during the Austro-Hungarian rule of Bosnia.

The A1 highway, in use between Zagreb and Ploče, is planned to be extended all the way to Dubrovnik. Because the area around the city is disconnected from the rest of Croatian territory, the highway will either cross the Pelješac Bridge whose construction is currently stalled, or run through Neum in Bosnia and Herzegovina and continue to Dubrovnik.

Dubrovnik has a borderline humid subtropical (Cfa) and Mediterranean climate (Csa) in the Köppen climate classification, since only one summer month has less than 40 mm (1.6 in) of rainfall, preventing it from being classified as solely humid subtropical or Mediterranean. It has hot, muggy, moderately dry summers and mild to cool, wet winters. The Bora wind blows cold gusts down the Adriatic coast between October and April, and thundery conditions are common all the year round, even in summer, when they interrupt the warm, sunny days. The air temperatures can slightly vary, depending on the area or region. Typically, in July and August daytime maximum temperatures reach 28 °C (82 °F), and at night drop to around 23 °C (73 °F). In Spring and Autumn maximum temperatures are typically between 20 °C (68 °F) and 28 °C (82 °F). Winters are among the mildest of any Croatian city, with daytime temperatures around 13 °C (55 °F) in the coldest months. Snow in Dubrovnik is very rare.

Panoramic view of the Old Town of Dubrovnik

All content from Kiddle encyclopedia articles (including the article images and facts) can be freely used under Attribution-ShareAlike license, unless stated otherwise. Cite this article:
Dubrovnik Facts for Kids. Kiddle Encyclopedia.