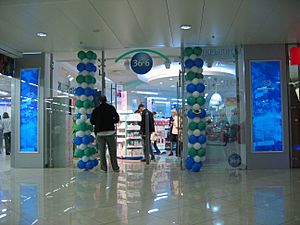 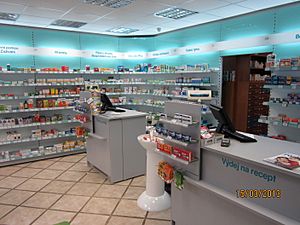 A pharmacy is a shop where therapeutic drugs are sold. Sometimes a pharmacy is also called a drug store. The people working in a pharmacy are called pharmacists or chemists (British English). These people can recognise simple diseases and give drugs for some of them.

Certain drugs are special, because they can be addictive, or they change the way other drugs act, or they need to be taken in a special way. These drugs cannot simply be bought at a pharmacy. A prescription is necessary to get them. Medical doctors give out prescriptions, which can then be used to get the drug.

Many pharmacies do not sell drugs only. They also sell beauty products and hygiene-related products.

Pharmacy is also a branch of chemistry that studies the molecular structure of drugs to find better drugs.

All content from Kiddle encyclopedia articles (including the article images and facts) can be freely used under Attribution-ShareAlike license, unless stated otherwise. Cite this article:
Pharmacy Facts for Kids. Kiddle Encyclopedia.