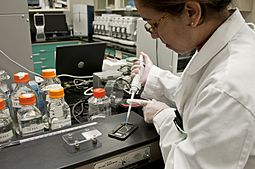 Toxicology is the study of how chemicals hurt living things. Toxicologists use biology, chemistry, pharmacology, and medicine. Measuring toxicity of a substance (relation between does and effect), is a major part of the work.

Many chemicals that we call poisons are only toxic when made into different chemicals by the body. Many chemicals are made toxic in the liver by enzymes, for example paracetamol, which is a common drug. There is also some variation in liver enzymes (caused by genetic variation) in different people that can cause a substance to be more toxic in one person than it is in another. Some substances are also only toxic when they are with other chemicals, as one liver enzyme can cause activity in another enzyme.

Some measures of toxicity

All content from Kiddle encyclopedia articles (including the article images and facts) can be freely used under Attribution-ShareAlike license, unless stated otherwise. Cite this article:
Toxicology Facts for Kids. Kiddle Encyclopedia.