The Star of Life sign, which is used to show Medical Services all over the world 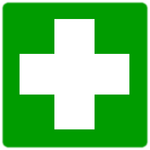 First aid is basic knowledge about how to help people who are suddenly sick (illnesses) or hurt (injuries or body damage). For example, first aid is used at accidents to help an injured person until he receives medical treatment (help by doctors, nurses or ambulances). First aid is also used to help people who suddenly become sick, until help arrives or they can be taken to medical care.

Emergency medical dispatchers are trained in first aid, so that if there is an emergency, they can give the caller some information on what to do until the ambulance arrives. This can include the "C-A-B" listed below. 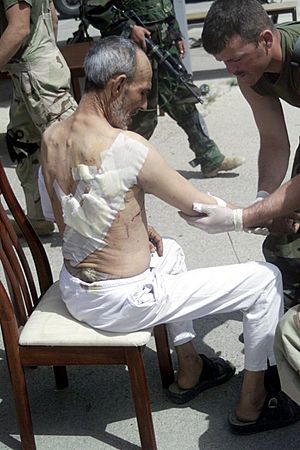 A US Navy corpsman gives first aid to an injured Iraqi citizen.

First aid skills are kept simple on purpose so that people can remember and use them in an emergency to save at least one life.

One set of goals of first aid is called the "Three P's":

Another set of goals for keeping a badly hurt person alive is sometimes called "C-A-B" :

People can learn about first aid from books ("manuals") and videos. A good first aid kit will often include a simple First Aid Guide.

It is best to have good training to give first aid. In addition to books and videos, good training includes a good teacher and the chance to practice. For example, CPR is practiced on a dummy called a manikin, so a student can learn to push down on someone's chest in an emergency without actually doing it to a person. The teacher makes sure the first aid student is doing the skill correctly.

Training can be given by an organization or by a professional medical person, like a doctor, a nurse, or a paramedic. Organizations that teach first aid include the International Red Cross, schools, hospitals, the military, Scout groups, and rescue groups such as fire departments. 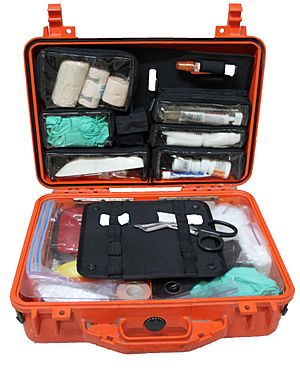 First aid kits may be kept in cloth bags or plastic or metal boxes. They are often labeled with a symbol such as those on the upper right. A first aid kit may contain many items, but basic items that can help with first aid include:

All content from Kiddle encyclopedia articles (including the article images and facts) can be freely used under Attribution-ShareAlike license, unless stated otherwise. Cite this article:
First aid Facts for Kids. Kiddle Encyclopedia.