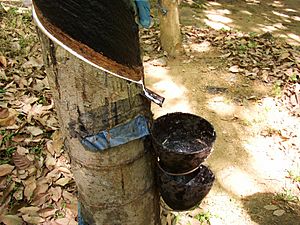 Latex harvesting from a tree 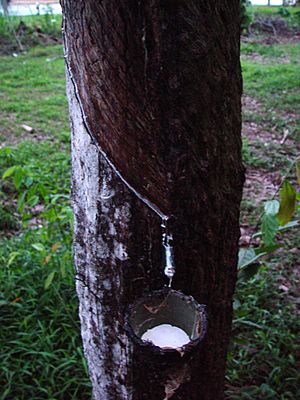 Latex is found in the sap of the Para rubber tree. The tree takes its name from the state of Pará, Brazil. Latex is used to make rubber. Brazil, in particular the city of Manaus grew rich on latex. Today, much natural latex comes from Southeast Asia, particularly Malaysia and Indonesia. Rubber can be produced synthetically (this means that it can be made in factories). 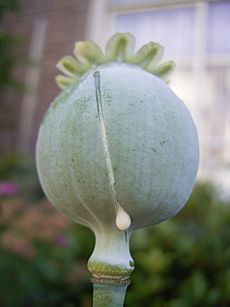 The latex of many species can be processed to produce many materials.

Natural rubber is the most important product obtained from latex; more than 12,000 plant species yield latex containing rubber, though in the vast majority of those species the rubber is not suitable for commercial use. This latex is used to make many other products including mattresses, gloves, swim caps, catheters and balloons.

Latex from the chicle and jelutong trees is used in chewing gum.

Dried latex from the opium poppy is called opium, the source of several useful alkaloids, such as morphine, codein and papaverine.

Synthetic latexes are used in coatings (e.g. latex paint) and glues because they solidify by coalescence of the polymer particles as the water evaporates, and therefore can form films without releasing potentially toxic organic solvents in the environment. Other uses include cement additives, and to conceal information on scratchcards. Latex, usually styrene-based, is also used in immunoassays.

Latex is used in many types of clothing. Worn on the body (or applied directly by painting) it tends to be skin-tight, producing a "second skin" effect.

Some people have a serious latex allergy, and exposure to latex products such as latex gloves can cause anaphylactic shock. Guayule latex has only 2% of the levels of protein found in Hevea latexes, and is being researched as a lower-allergen substitute. Additionally, chemical processes may be employed to reduce the amount of antigenic protein in Hevea latex, yielding alternative materials such as Vytex Natural Rubber Latex which provide significantly reduced exposure to latex allergens.

All content from Kiddle encyclopedia articles (including the article images and facts) can be freely used under Attribution-ShareAlike license, unless stated otherwise. Cite this article:
Latex Facts for Kids. Kiddle Encyclopedia.