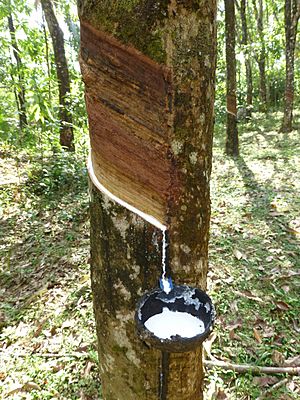 Rubber tapping is the process by which latex is collected from a rubber tree. The latex is harvested by slicing a groove into the bark of the tree at a depth of a quarter inch with a hooked knife and peeling back the bark. Trees must be approximately six years old and six inches in diameter in order to be tapped for latex. 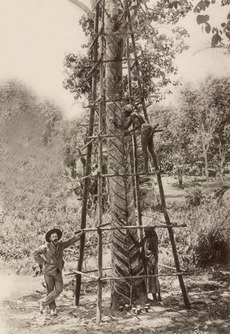 Rubber tapping in Malaya, circa 1910 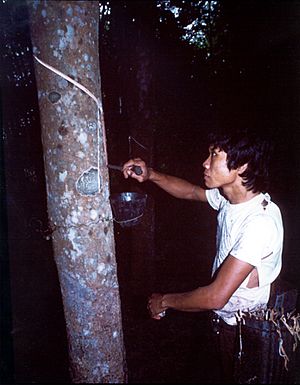 Each night a rubber tapper must remove a thin layer of bark along a downward half spiral on the tree trunk. If done carefully and with skill, this tapping panel will yield latex for up to five hours. Then the opposite side will be tapped, allowing this side to heal over. The spiral allows the latex to run down to a collecting cup. The work is done at night or in the early morning before the day's temperature rises, so the latex will drip longer before coagulating and sealing the cut.

Depending on the final product, additional chemicals can be added to the latex cup to preserve the latex longer. Ammonia solution helps prevent natural coagulation and allows the latex to remain in its liquid state. Plastic bags containing a coagulant have replaced cups in many plantations in Malaysia. This form of latex is used as the raw material for latex concentrate, which is used for dipped rubber products or for the manufacture of ribbed smoke sheet grades.

Naturally coagulated latex, sometimes referred to as cup lump, is collected for processing into block rubbers, which are referred to as technically specified rubbers (TSRs). The serum left after latex coagulation is rich in quebrachitol, a cyclitol or cyclic polyol.

All content from Kiddle encyclopedia articles (including the article images and facts) can be freely used under Attribution-ShareAlike license, unless stated otherwise. Cite this article:
Rubber tapping Facts for Kids. Kiddle Encyclopedia.