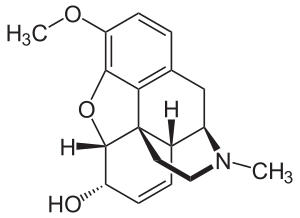 the chemical structure of Codeine

Codeine or methylmorphine is an opiate used for its analgesic properties. It is also used to treat coughing and diarrhea. It is marketed as the salts codeine sulfate and codeine phosphate. Codeine hydrochloride is more commonly marketed in continental Europe and other regions.

Codeine is an alkaloid found in opium in concentrations ranging from 0.3 to 3.0 percent. Codeine can be extracted from opium. Today, most codeine is synthesized from morphine through the process of O-methylation.

Codeine is used to treat the following:

Codeine is often marketed as drugs in combination with paracetamol (acetaminophen) as co-codamol (best known in North America as Tylenol 3). Research has shown the combination to be very much more effective than paracetamol, and much less addictive that pure codeine.

There are similar combinations with aspirin as co-codaprin or with ibuprofen. These combinations provide greater pain relief than either agent alone. Drug synergy is an important principle.

All content from Kiddle encyclopedia articles (including the article images and facts) can be freely used under Attribution-ShareAlike license, unless stated otherwise. Cite this article:
Codeine Facts for Kids. Kiddle Encyclopedia.