Ibuprofen is a nonsteroidal anti-inflammatory drug (NSAID) widely marketed under various trademarks including Act-3, Advil, Brufen, Motrin, Nuprin, and Nurofen; a standing joke about some athletes' regular use has produced "Vitamin I" as a slang term for it. It is used for relief of symptoms of arthritis, primary dysmenorrhoea, and fever; and as an analgesic, especially where there is an inflammatory component. Ibuprofen was developed by the research arm of Boots Group. 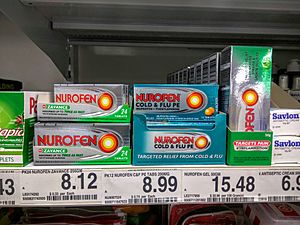 Approved clinical indications for ibuprofen include:

All content from Kiddle encyclopedia articles (including the article images and facts) can be freely used under Attribution-ShareAlike license, unless stated otherwise. Cite this article:
Ibuprofen Facts for Kids. Kiddle Encyclopedia.