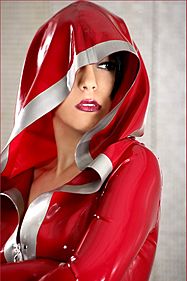 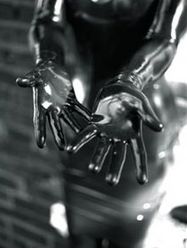 Latex has been used to make leotards, bodysuits, stockings and gloves, besides other garments.

Because latex sheet is relatively weak, latex clothing needs special care to avoid tearing. While latex can be repaired using materials similar to those provided in a bicycle repair kit, the result is rarely as attractive as the original appearance of the garment.

Latex clothing is often polished to preserve and improve its shiny appearance.

Putting on latex clothing can be difficult, because latex has high friction against dry skin. To make it easier to put on, wearers often use talc to reduce friction against the skin when putting the clothes on; then, because stray talc is very visible against the rubber, wearers generally polish off any visible talc. Another method of dressing is using lubricant (or 'lube') which provides a slippery surface for the latex to glide over. A third method of reducing or eliminating the high friction of latex when dressing is to chlorinate the rubber. Chlorine in gaseous form is generated by the reaction of hydrochloric acid and sodium hypochlorite. This chlorine bonds to the first few molecules on the surface of the isoprene (latex) and transforms them into neoprene. This process affects metallic colours, but does not affect strength.

Latex may also be painted directly onto the body as latex in liquid form, which is also sometimes used to close seams in the creation of latex clothing. Removal of a painted on liquid latex garment can result in painful hair removal. Wearers avoid this by preparing the skin by prior hair removal, the use of release agents to prevent the latex adhering to the hair, or using products such as orange oil to weaken the latex during removal.

Use of latex clothing has been popularized by media appearances, such as the outfit of Catwoman, a cat burglar, in Batman Returns or the outfits in The Matrix which are mostly made of latex.

All content from Kiddle encyclopedia articles (including the article images and facts) can be freely used under Attribution-ShareAlike license, unless stated otherwise. Cite this article:
Latex clothing Facts for Kids. Kiddle Encyclopedia.