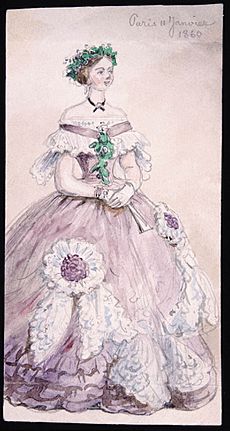 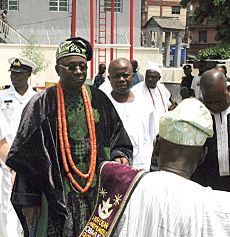 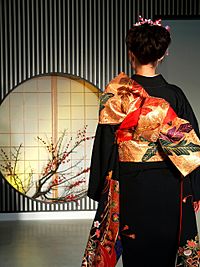 Clothing is an item or fabric which is made to cover part of the human body. Humans are the only animals which wear clothing, and almost all people do wear clothing.

The torso (body) can be covered by a shirt, arms by sleeves, legs by pants or skirt, the hands by gloves, and feet by footwear. In cold climates, people also wear heavy, thick coats such as trenchcoats.

Clothing is also worn for decoration, as a fashion (clothing). People from different cultures wear different clothing, and have different beliefs and customs about what type of clothing should be worn. For many people, clothing is a status symbol. It helps people project an image. Often, clothing is a form of self-expression. Adults in different social or work situations present different views of themselves by the clothes they wear. Young people have an entirely different form of dress to express their personalities. Often people will simply follow popular fashion styles so that they will fit in. Clothing is far more than just a means to protect our bodies.

There is no easy way to be sure when clothing was first developed, because it was prehistoric and clothing is perishable. Some information comes from studying lice. The body louse lives in clothing, and diverged from head lice about 107,000 years ago. This suggests that clothing existed at that time. Another theory is that modern humans are the only survivors of several species of primates who may have worn clothes, and that clothing may have been used as long ago as 650 thousand years ago. Other louse-based estimates put the introduction of clothing at around 42,000–72,000 BC.

A cloak made of the fur of squirrels, from a cave in Italy, has been dated to 23.000 years BP, and is possibly among the oldest items of clothing.

Things that are not clothing

People often decorate their bodies with makeup or perfume, and they also cut or change the hair on their heads and faces. They might also go in for body modification: tattoos, scarifications, and body piercings. But makeup and tattoos are not kinds of clothing.

Things that are carried and not worn, like wallets, purses, canes, and umbrellas, are called accessories, but they are not kinds of clothing, either. Jewelry and eyeglasses are also accessories that are put on the body. Nail polish is also put on the fingertips and can be interpreted as makeup.

What clothing is made of

Clothing is often made of:

All content from Kiddle encyclopedia articles (including the article images and facts) can be freely used under Attribution-ShareAlike license, unless stated otherwise. Cite this article:
Clothing Facts for Kids. Kiddle Encyclopedia.