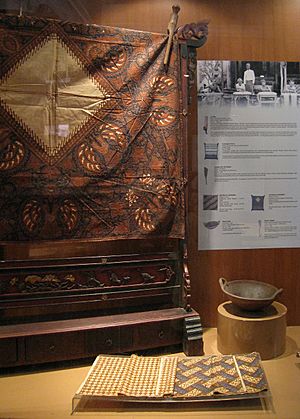 Batik is a method of dyeing cloth and making it resistant using wax. Such fabrics originally come from Indonesia. They can also be found in Malaysia, Japan, China, Azerbaijan, India, Sri Lanka, Egypt, Nigeria, Senegal, and Singapore.

Evidence of early examples of batik has been found in the Far East, Middle East, Central Asia and India from over 2000 years ago. However, it is more likely that the craft spread from Asia to the islands of the Malay Archipelago and west to the Middle East through the caravan route. They are decorated with trees, animals, flute players, hunting scenes, and mountains. Indonesia, most popular on the island of Java, is the area where batik has reached the greatest accomplishment.There are many examples of this form of batik, as well as hand-produced work in many parts of the world today.

Batik is an art that is becoming more popular in the West. In Indonesia, batik is a part of an ancient tradition and has been taught for centuries. The word batik is from Java and it means to "dot". To make a batik, an artist uses the cloth as the paper, and they just start drawing hot wax over the cloth. Each culture has different traditional styles of batik. The history of batik is really expressive. There are a lot of techniques available for the artist to have the opportunity to explore a unique process in an exciting way. 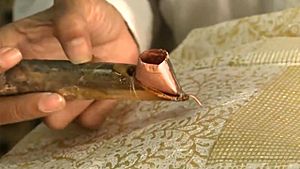 A special pen called tjanting, it is used to draw a batik. 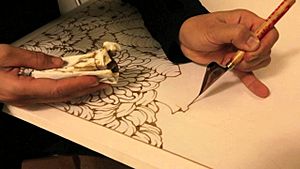 This picture shows the person is drawing a batik with tjanting.

To make a batik, they use the cloth as the paper, and they just start drawing hot wax over the cloth. And they said if we repeated the process, it will be more colorful. For the first step, make sure the cloth is washed. Batik patterns are drawn with pencil and later drawn again using a hot wax. The very common thing that people use is the pen-like instrument called a tjanting. After the cloth is dry, the areas keep their original color, and it also shows the pattern between the areas that have the color and do not have the color. It gives them a pattern. Then the artist repeats the process once for each color. A very traditional type of batik, called written batik, is drawn using only a tjanting. The cloth needs to be drawn on both sides and put in a color bath three or four times. The process may take up to a year.

All content from Kiddle encyclopedia articles (including the article images and facts) can be freely used under Attribution-ShareAlike license, unless stated otherwise. Cite this article:
Batik Facts for Kids. Kiddle Encyclopedia.