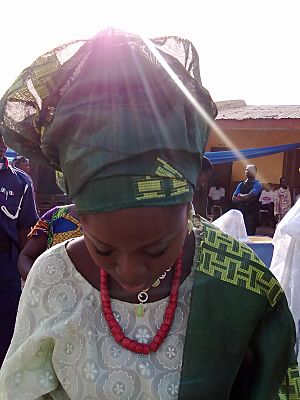 A Nigerian Yoruba bride in a lace Buba blouse, with Ipele and the gele headtie made from contemporary Aso Oke

Yoruba is an ethnic group of people living in Africa. They live on the west coast of Africa, mostly they are one of the major tribes in Nigeria Nigeria and Ghana.

All content from Kiddle encyclopedia articles (including the article images and facts) can be freely used under Attribution-ShareAlike license, unless stated otherwise. Cite this article:
Yoruba people Facts for Kids. Kiddle Encyclopedia.