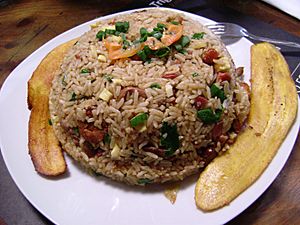 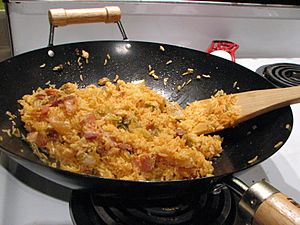 Fried rice is a dish of cooked rice that has been stir-fried in a wok or a frying pan and is usually mixed with other ingredients such as eggs, vegetables, seafood, or meat. It is often eaten by itself or as an accompaniment to another dish. Fried rice is a popular component of East, Southeast and certain South Asian cuisines. As a homemade dish, fried rice is typically made with ingredients left over from other dishes, leading to countless variations. Being an economical hodgepodge, the same approach is often taken with fried noodles or pyttipanna as well.

Many popular varieties of fried rice have their own specific list of ingredients. In Greater China, the most famous varieties include Yangzhou fried rice and Hokkien fried rice. Japanese chāhan is considered a Japanese Chinese dish, having derived from Chinese fried rice dishes. Korean bokkeum-bap in general isn't, although there is a Korean Chinese variety of bokkeum-bap. In Southeast Asia, similarly constructed Indonesian, Malaysian, and Singaporean nasi goreng and Thai khao phat are popular dishes. In the West, most restaurants catering to vegetarian or Muslim clientele have invented their own varieties of fried rice, including egg fried rice. Fried rice is also seen on the menus of American restaurants offering cuisines with no native tradition of the dish. Additionally, there are variations of fried rice in countries to the south of the United States. Some of these variations include Ecuadorian chaulafan, Peruvian arroz chaufa, Cuban arroz frito, and Pueto Rican arroz mamposteao.

Fried rice is a popular street food in Asia. In some Asian countries, small restaurants, street vendors and traveling hawkers specialize in serving fried rice. In Indonesian cities it is common to find fried rice street hawkers moving through the streets with their food cart and stationing it in busy streets or residential areas. Many Southeast Asian street food stands offer fried rice with a selection of optional garnishes and side dishes.

Cooked rice is the primary ingredient, with myriad of additional ingredients (sometimes and/or preferably, leftovers), such as vegetables, eggs, meat (chicken, beef, pork), preserved meat (bacon, ham, sausage), seafood (fish, shrimp, crab), mushrooms, among others. Aromatics such as onions, shallots, scallions, and garlic are often added for extra flavor. Various cooking oils, such as vegetable oil, sesame oil, or lard can be used to grease the wok or frying pan to prevent sticking, as well as for flavor. Fried rice dishes can be seasoned with salt, different types of soy sauce, oyster sauce and/or many other sauces and spices. Popular garnishes include chopped scallions, sliced chili, fried shallots, sprigs of parsley or coriander leaves, toasted sesame seeds, seaweed flakes (gim or nori), sliced cucumber, tomato, lime, or pickled vegetables. 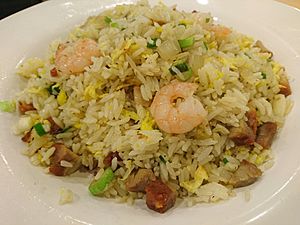 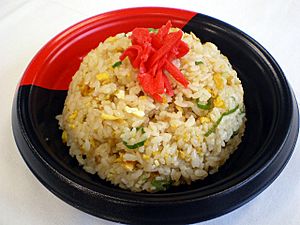 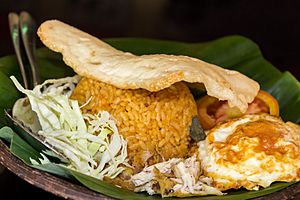 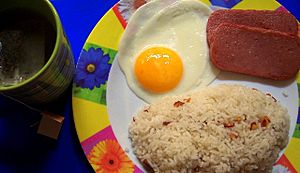 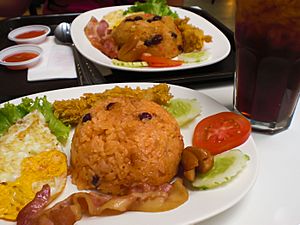 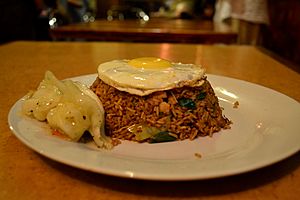 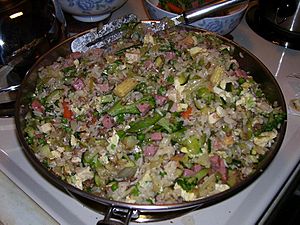 All content from Kiddle encyclopedia articles (including the article images and facts) can be freely used under Attribution-ShareAlike license, unless stated otherwise. Cite this article:
Fried rice Facts for Kids. Kiddle Encyclopedia.