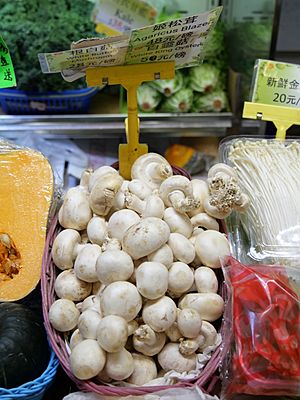 White mushrooms - while common, they are just one of the many types of mushrooms cultivated and eaten

Edible mushrooms are the fleshy and edible fruit bodies of several species of macrofungi (fungi which bear fruiting structures that are large enough to be seen with the naked eye). They can appear either below ground (hypogeous) or above ground (epigeous) where they may be picked by hand. Edibility may be defined by criteria that include absence of poisonous effects on humans and desirable taste and aroma. Edible mushrooms are consumed for their nutritional and culinary value. Mushrooms, especially dried shiitake, are sources of umami flavor. Especially tasty and desired mushrooms are referred as "choice edible".

Edible mushrooms include many fungal species that are either harvested wild or cultivated. Easily cultivated and common wild mushrooms are often available in markets, and those that are more difficult to obtain (such as the prized truffle, matsutake and morel) may be collected on a smaller scale by private gatherers. Some preparations may render certain poisonous mushrooms fit for consumption.

Before assuming that any wild mushroom is edible, it should be identified. Accurate determination and proper identification of a species is the only safe way to ensure edibility, and the only safeguard against possible accident. Some mushrooms that are edible for most people can cause allergic reactions in some individuals, and old or improperly stored specimens can cause food poisoning. Great care should therefore be taken when eating any fungus for the first time, and only small quantities should be consumed in case of individual allergies. Deadly poisonous mushrooms that are frequently confused with edible mushrooms and responsible for many fatal poisonings include several species of the genus Amanita, particularly Amanita phalloides, the death cap. Even normally edible species of mushrooms may be dangerous, as mushrooms growing in polluted locations can accumulate pollutants, such as heavy metals.

Despite long-term use in folk medicine, there is no scientific evidence that consuming "medicinal mushrooms" cures or lowers the risk of human diseases. 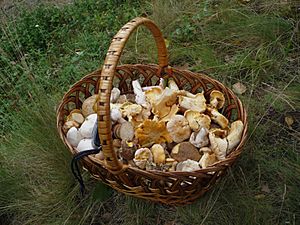 History of mushroom use

Mycophagy the act of consuming mushrooms, dates back to ancient times. Edible mushroom species have been found in association with 13,000-year-old archaeological sites in Chile. Ötzi, the mummy of a man who lived between 3400 and 3100 BCE in Europe, was found with two types of mushroom. The Chinese value mushrooms for supposed medicinal properties as well as for food. Ancient Romans and Greeks, particularly the upper classes, used mushrooms for culinary purposes. Food tasters were employed by Roman emperors to ensure that mushrooms were safe to eat.

In 2019, world production of commercial mushrooms and recorded truffle collection reported to the Food and Agriculture Organization was 11.9 million tonnes, led by China with 75% of the total (table).

Mushroom cultivation has a long history, with over twenty species commercially cultivated. Mushrooms are cultivated in at least 60 countries. A fraction of the many fungi consumed by humans are currently cultivated and sold commercially. Commercial cultivation is important ecologically, as there have been concerns of depletion of larger fungi such as chanterelles in Europe, possibly because the group has grown popular, yet remains a challenge to cultivate. 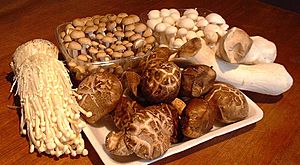 Many wild species are consumed around the world. The species which can be identified "in the field" (without use of special chemistry or a microscope) and therefore safely eaten vary widely from country to country, even from region to region. This list is a sampling of lesser-known species that are reported as edible. 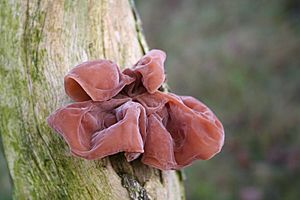 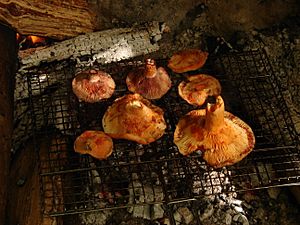 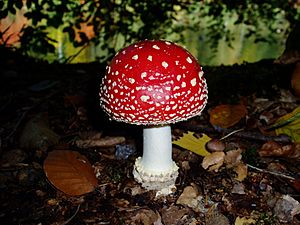 A. muscaria, a conditionally-edible species

The content of vitamin D is absent or low unless mushrooms are exposed to sunlight or purposely treated with artificial ultraviolet light (see below), even after harvesting and processed into dry powder.

Mushrooms exposed to ultraviolet (UV) light produce vitamin D2 before or after harvest by converting ergosterol, a chemical found in large concentrations in mushrooms, to vitamin D2. This is similar to the reaction in humans, where vitamin D3 is synthesized after exposure to sunlight. 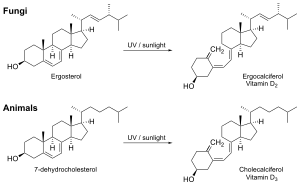 The photochemistry of Vitamin D biosynthesis

Use in traditional medicine

Medicinal mushrooms are mushrooms or extracts from mushrooms that are thought to be treatments for diseases, yet remain unconfirmed in mainstream science and medicine, and so are not approved as drugs or medical treatments. Such use of mushrooms therefore falls into the domain of traditional medicine for which there is no direct high-quality clinical evidence of efficacy.

Preliminary research on mushroom extracts has been conducted to determine if anti-disease properties exist, such as for polysaccharide-K or lentinan. Some extracts have widespread use in Japan, Korea and China, as potential adjuvants for radiation treatments and chemotherapy.

Some wild species are toxic, or at least indigestible, when raw. The safety of consuming Reishi mushrooms has not been adequately demonstrated, as of 2019. Reishi mushrooms may cause side effects including dryness of the mouth or throat, itchiness, rash, stomach upset, diarrhea, headache, or allergic reactions. Failure to identify poisonous mushrooms and confusing them with edible ones has resulted in death.

All content from Kiddle encyclopedia articles (including the article images and facts) can be freely used under Attribution-ShareAlike license, unless stated otherwise. Cite this article:
Edible mushroom Facts for Kids. Kiddle Encyclopedia.