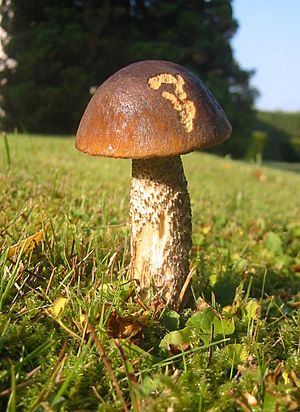 A mushroom is the fruiting body of a kind of fungus. Unlike plants, mushrooms do not use sunlight to make energy for themselves. A toadstool is another name for a mushroom. Some mushrooms can be eaten, and are used for cooking in many countries: China, Korea and many European countries. People who look for mushrooms to eat are called mycophagists, meaning "mushroom eater". The act of looking for mushrooms is simply called "mushrooming". 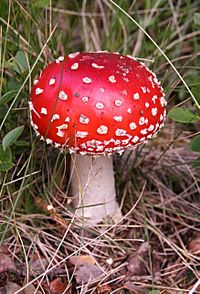 The fly agaric mushroom is poisonous 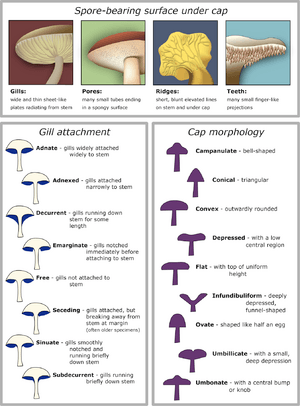 Morphological characteristics of the caps of mushrooms

Identifying mushrooms requires a basic understanding of their macroscopic structure. Most are Basidiomycetes and gilled. Their spores, called basidiospores, are produced on the gills and fall in a fine rain of powder from under the caps as a result.

At the microscopic level, the basidiospores are shot off basidia and then fall between the gills in the dead air space. As a result, for most mushrooms, if the cap is cut off and placed gill-side-down overnight, a powdery impression reflecting the shape of the gills (or pores, or spines, etc.) is formed (when the fruit body is sporulating). The color of the powdery print, called a spore print, is used to help classify mushrooms and can help to identify them. Spore print colors include white (most common), brown, black, purple-brown, pink, yellow, and creamy, but almost never blue, green, or red. 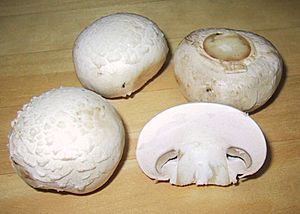 The Agaricus bisporus, one of the most widely cultivated and popular mushrooms in the world 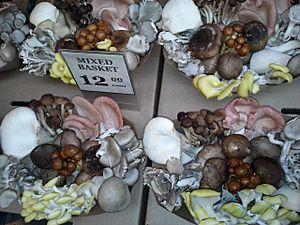 Mushrooms are used extensively in cooking, in many cuisines (notably Chinese, Korean, European, and Japanese). Though neither meat nor vegetable, mushrooms are known as the "meat" of the vegetable world.

Most mushrooms sold in supermarkets have been commercially grown on mushroom farms. The most popular of these, Agaricus bisporus, is considered safe for most people to eat because it is grown in controlled, sterilized environments. Several varieties of A. bisporus are grown commercially, including whites, crimini, and portobello. Other cultivated species available at many grocers include Hericium erinaceus, shiitake, maitake (hen-of-the-woods), Pleurotus, and enoki. In recent years, increasing affluence in developing countries has led to a considerable growth in interest in mushroom cultivation, which is now seen as a potentially important economic activity for small farmers.

China is a major edible mushroom producer. The country produces about half of all cultivated mushrooms, and around 2.7 kilograms (6.0 lb) of mushrooms are consumed per person per year by over a billion people. In 2014, Poland was the world's largest mushroom exporter, reporting an estimated 194,000 tonnes (191,000 long tons; 214,000 short tons) annually.

A number of species of mushrooms are poisonous; although some resemble certain edible species, consuming them could be fatal. Eating mushrooms gathered in the wild is risky and should only be undertaken by individuals knowledgeable in mushroom identification. Common best practice is for wild mushroom pickers to focus on collecting a small number of visually distinctive, edible mushroom species that cannot be easily confused with poisonous varieties.

All content from Kiddle encyclopedia articles (including the article images and facts) can be freely used under Attribution-ShareAlike license, unless stated otherwise. Cite this article:
Mushroom Facts for Kids. Kiddle Encyclopedia.