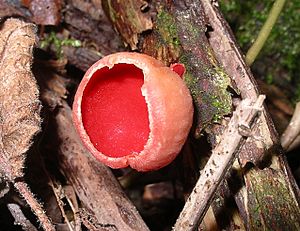 In fungi, the sporocarp (sometimes known at the fruiting body or the fruit body) is a multicellular structure on which spore-producing structures, such as basidia or asci, are borne.

The largest known fruiting body is the Fomitiporia ellipsoidea species, found on Hainan Island. The species can measure up to 1,085 centimetres (427 in) in length, and is estimated to weigh between 400 and 500 kilograms (880 and 1,100 lb).

All content from Kiddle encyclopedia articles (including the article images and facts) can be freely used under Attribution-ShareAlike license, unless stated otherwise. Cite this article:
Sporocarp (fungi) Facts for Kids. Kiddle Encyclopedia.