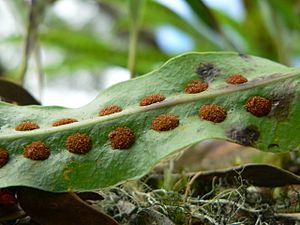 Sporangia on the underside of the leaf of a fern 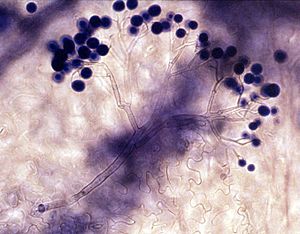 The spores of seed plants are single cells that grow into a pollen grain or the gametophyte inside the ovule. The structure of seeds in higher plants is more complicated than spores. The main 'innovation' of seeds is their nutrition for the developing embryo, which spores do not have.

Fungi (for example, mushrooms) produce spores, which may be asexual or sexual. The asexual spores have inside them the genetic material to make a whole new organism identical to its parent.

Conidia are asexual, non-motile spores of a fungus; they are also called mitospores due to the way they are generated through the cellular process of mitosis. They are haploid cells genetically identical to the haploid parent, can develop into a new organism if conditions are favorable, and serve in dispersal.

Asexual reproduction in Ascomycetes (the Phylum Ascomycota) is by the formation of conidia, which are borne on specialized stalks called conidiophores. The morphology of these specialized conidiophores is often distinctive of a specific species and can therefore be used in identification of the species.

Bacterial spores are extremely resistant. Spores of tetanus and anthrax, for example, can survive in the soil for many years. The origin of these spores was discovered in the 19th century, when a biologist noticed, under the microscope, a small, round, bright body inside bacterial cells. This survived even when the bacteria were boiled for five minutes. This killed the bacteria, but not the spores. They germinated when conditions were right.p186

Plants have alternation of generations. One of the generations is the sporophyte, which produces spores by meiosis, and the other is the gametophyte with produces gametes. 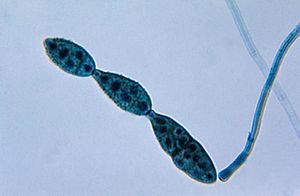 Chain of conidia of Alternaria

All content from Kiddle encyclopedia articles (including the article images and facts) can be freely used under Attribution-ShareAlike license, unless stated otherwise. Cite this article:
Spore Facts for Kids. Kiddle Encyclopedia.