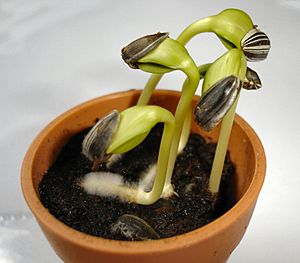 Germination occurs when a spore or seed starts to grow. It is a term used in botany. When a spore or seed germinates, it produces a shoot or seedling, or (in the case of fungi) a hypha. The biology of spores is different from seeds.

A spore germinates if and when conditions are right. It has a very limited lifespan. The method of spore-bearers, which are lower plants such as mosses, ferns and also fungi, is to produce vast numbers of spores, of which only a small percentage germinate.

Seeds contain an embryo, a store of food (the endosperm), and a protective coat. Seed plants include Gymnosperms (such as conifers) and Angiosperms (such as flowering plants). Seeds can survive much longer than spores, sometimes for hundreds of years. The strategy of seed-bearing plants is to invest energy and material in the substance of seeds, and they have evolved more sophisticated methods of dispersal than just wind.p98

Seeds do not germinate until their requirements are met, and these needs differ from species to species.

The requirements for fruits is the same as for seeds. A fruit is just a seed with one or more extra layers derived from parts of the flower. 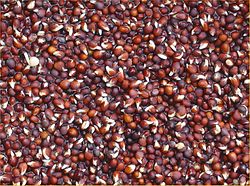 Germination is usually the growth of a plant contained within a seed; it results in the formation of the seedling, it is also the process of reactivation of metabolic machinery of the seed resulting in the emergence of radicle and plumule. The seed of a vascular plant is a small package produced in a fruit or cone after the union of male and female reproductive cells. All fully developed seeds contain an embryo and, in most plant species some store of food reserves, wrapped in a seed coat. Some plants produce varying numbers of seeds that lack embryos; these are called empty seeds and never germinate. Dormant seeds are ripe seeds that do not germinate because they are subject to external environmental conditions that prevent the initiation of metabolic processes and cell growth. Under proper conditions, the seed begins to germinate and the embryonic tissues resume growth, developing towards a seedling.

Seed germination depends on both internal and external conditions. The most important external factors include right temperature, water, oxygen or air and sometimes light or darkness. Various plants require different variables for successful seed germination. Often this depends on the individual seed variety and is closely linked to the ecological conditions of a plant's natural habitat. For some seeds, their future germination response is affected by environmental conditions during seed formation; most often these responses are types of seed dormancy.

Most common annual vegetables have optimal germination temperatures between 75-90 F (24-32 C), though many species (e.g. radishes or spinach) can germinate at significantly lower temperatures, as low as 40 F (4 C), thus allowing them to be grown from seeds in cooler climates. Suboptimal temperatures lead to lower success rates and longer germination periods.

Scarification mimics natural processes that weaken the seed coat before germination. In nature, some seeds require particular conditions to germinate, such as the heat of a fire (e.g., many Australian native plants), or soaking in a body of water for a long period of time. Others need to be passed through an animal's digestive tract to weaken the seed coat enough to allow the seedling to emerge. 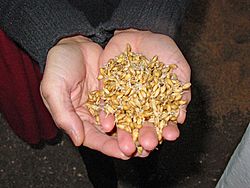 Some live seeds are dormant and need more time, and/or need to be subjected to specific environmental conditions before they will germinate. Seed dormancy can originate in different parts of the seed, for example, within the embryo; in other cases the seed coat is involved. Dormancy breaking often involves changes in membranes, initiated by dormancy-breaking signals. This generally occurs only within hydrated seeds. Factors affecting seed dormancy include the presence of certain plant hormones, notably abscisic acid, which inhibits germination, and gibberellin, which ends seed dormancy. In brewing, barley seeds are treated with gibberellin to ensure uniform seed germination for the production of barley malt.

In some definitions, the appearance of the radicle marks the end of germination and the beginning of "establishment", a period that utilizes the food reserves stored in the seed. Germination and establishment as an independent organism are critical phases in the life of a plant when they are the most vulnerable to injury, disease, and water stress. The germination index can be used as an indicator of phytotoxicity in soils. The mortality between dispersal of seeds and completion of establishment can be so high that many species have adapted to produce huge numbers of seeds 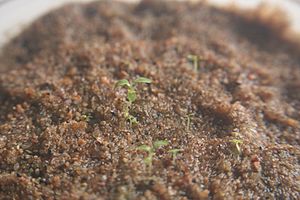 Germination of seedlings raised from seeds of eucalyptus after 3 days of sowing.

All content from Kiddle encyclopedia articles (including the article images and facts) can be freely used under Attribution-ShareAlike license, unless stated otherwise. Cite this article:
Germination Facts for Kids. Kiddle Encyclopedia.