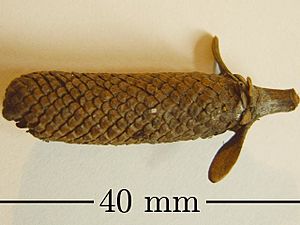 The gymnosperms are a group of seed plants which includes conifers, cycads, Ginkgo and Gnetales.

They have naked seeds, in contrast to the seeds or ovules of flowering plants (angiosperms) which are enclosed during pollination. Gymnosperm seeds develop either on the surface of scale- or leaf-like appendages of cones, or at the end of short stalks (Ginkgo).

The gymnosperms and angiosperms together make up the spermatophytes or seed plants. By far the largest group of living gymnosperms are the conifers (pines, cypresses, and relatives), followed by cycads, Gnetales (Gnetum, Ephedra and Welwitschia), and Ginkgo (a single living species).

Fossil gymnosperms include many that do not belong to the four modern groups, including the so-called "seed ferns" (Pteridosperms) and the "cycadeoids" (Bennettitales). Most of the Gymnosperms became extinct in the Cenozoic era (from 65 million years ago to present day).

All content from Kiddle encyclopedia articles (including the article images and facts) can be freely used under Attribution-ShareAlike license, unless stated otherwise. Cite this article:
Gymnosperm Facts for Kids. Kiddle Encyclopedia.