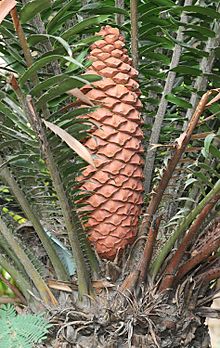 Leaves and cone of Encephalartos sclavoi

Pinnate divided leaves of a cycad, with new growth in the centre in the form of a bud 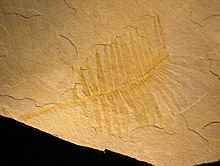 Cycads are seed plants whose fossils are first found in the early Permian period.

They were very common in the Mesozoic era, the age of the dinosaurs, and are still living, but are now much less common. Only 9 genera (including 100 species) of cycads are found to be extant nowadays. Cycads are thought to have evolved from order Pteridospermae (seed ferns) of angiosperms, now totally extinct.

They are different from most plants because they have large crowns of compound leaves and a stout trunk. They are evergreen, dioecious plants having large pinnately compound leaves.

They are frequently confused with and mistaken for palms or ferns, but are only distantly related to both, and instead belong to the division Cycadophyta.

Cycads are gymnosperms (naked seeded). Their unfertilized seeds are open to the air to be directly fertilized by pollination. This contrasts with angiosperms, which have enclosed seeds and more complex fertilization arrangements. Cycads have very specialized pollinators, usually a specific species of beetle.

They have been reported to fix nitrogen in association with various cyanobacteria living in the roots (the "coralloid" roots).

These photosynthetic cyanobacteria produce a neurotoxin called BMAA that is found in the seeds of cycads. This neurotoxin may enter a human food chain if the cycad seeds are eaten, and may cause some neurological diseases.

All content from Kiddle encyclopedia articles (including the article images and facts) can be freely used under Attribution-ShareAlike license, unless stated otherwise. Cite this article:
Cycad Facts for Kids. Kiddle Encyclopedia.