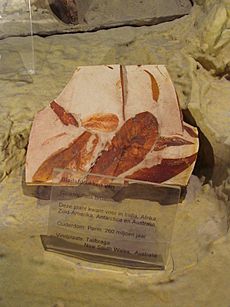 The oldest fossil evidence of plants of this type is from Upper Devonian strata, and they flourished particularly during the Carboniferous and Permian periods.

Pteridosperms declined during the Mesozoic Era and had mostly disappeared by the end of the Cretaceous, though some fossil pteridosperm-like plants seem to have survived into Eocene times in Tasmania.

History of the term

The concept of the pteridosperms goes back to the late 19th century when palaeobotanists came to realise that many Carboniferous fossils resembling fern fronds had anatomical features like cycads.

British palaeobotanists made the critical discovery that some of these fronds were associated with seeds, and concluded that the fronds and seeds belonged to the same plants.

Initially it was still thought that they were intermediate between the ferns and cycads, and especially in the English-speaking world they were referred to as "seed ferns" or "pteridosperms". Today, most palaeobotanists regard them as being only distantly related to ferns and that these names are misleading, but the names have nevertheless stuck.

Later during the 20th century, the concept of pteridosperms was expanded to include various Mesozoic groups of seed plants with fern-like fronds. Some palaeobotanists also included seed plant groups with entire leaves such as Glossopteris and its relatives, which was clearly stretching the concept.

The seed ferns were by far the earliest seed plants, and must have included the ancestors of the later plants. They are spread across a range of clades and many palaeobotanists today would regard pteridosperms as little more than a paraphyletic 'grade-group'.

So, does the concept of pteridosperms have any value today? Many palaeobotanists still use the term in an informal sense for the seed plants that are not angiosperms, coniferoids (conifers or cordaites), ginkgophytes or cycadophytes (cycads or bennettites).

This is particularly useful for extinct seed plant groups, whose relationships are unknown. We can call them pteridosperms with no suggestion of being a clade. Also, for curators or collectors, the term 'pteridosperm' is a useful shorthand for describing fern-like fronds probably produced by seed plants, which are often found in Palaeozoic and Mesozoic fossil floras.

All content from Kiddle encyclopedia articles (including the article images and facts) can be freely used under Attribution-ShareAlike license, unless stated otherwise. Cite this article:
Seed fern Facts for Kids. Kiddle Encyclopedia.