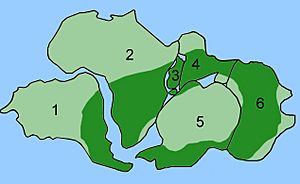 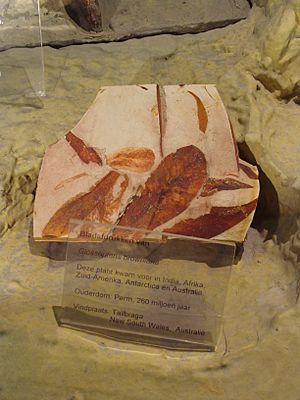 Glossopteris is the largest and best-known genus of the extinct seed ferns. They were typical plants of the coal forests or coal swamps which lasted from the Pennsylvanian (later Carboniferous) to the end of the Permian.

The coal swamps were world-wide because, for that long time, the continents were close together in Gondwana. Therefore they had similar wet, tropical climates.

The Glossopteridales arose in the Southern Hemisphere around the beginning of the Permian (~300 milliom years ago). Their distribution across several continents led Eduard Suess to suggest the southern continents were once together in a single supercontinent – Gondwana.

These plants went on to become the dominant elements of the southern flora through the rest of the Permian but disappeared in almost all places at the end of the Permian (~250mya).

The only convincing Triassic records are very earliest Triassic leaves from Nidpur, India. Even these records are somewhat questionable owing to faulting and complex juxtapositioning of Permian and Triassic strata at Nidpur.

Some textbooks cite the continuation of glossopterids into later parts of the Triassic and, in some cases into the Jurassic. These are mistakes based on misidentification of similar leaves, such as those of Gontriglossa, Sagenopteris, or Mexiglossa.

Glossopterids were, thus, one of the major casualties of the end-Permian mass-extinction event.

All content from Kiddle encyclopedia articles (including the article images and facts) can be freely used under Attribution-ShareAlike license, unless stated otherwise. Cite this article:
Glossopteris Facts for Kids. Kiddle Encyclopedia.