Ferns are a group of about 20,000 species of plants (of which about 10,000 are living) in the division Pteridophyta. Unlike bryophytes, ferns have xylem and phloem, which makes them vascular plants.

Most ferns belong to the Class Leptosporangiata (or Pteridopsida). This includes most of those you see in gardens and woods. The horsetails belong to another class, the Equisetopsida, which was extremely important in the Carboniferous period. Only one genus survives. The other classes of fern are also quite small today.

Ferns do not have waxes or special cells on their surface that keep water from evaporating. They have roots, stems, leaves. Their stems may form runners, called stolons above the ground, or rhizomes below ground. The leaves are green an large, and may bear spores on the underside. Some ferns can grow large in moist places. They can survive in more places than moss, but not so many as flowering plants.

During the Carboniferous period – from 350 million years ago – ferns lived everywhere on land. Horsetails grew up to 30 metres. There were huge forests of ferns and mosses, full of giant insects. Today, there are not so many large ferns. 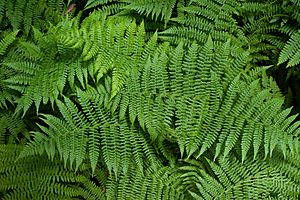 The stereotypical image of ferns growing in moist shady woodland nooks is far from a complete picture of the habitats where ferns can be found growing. Fern species live in a wide variety of habitats, from remote mountain elevations, to dry desert rock faces, to bodies of water or in open fields. Ferns in general may be thought of as largely being specialists in marginal habitats, often succeeding in places where various environmental factors limit the success of flowering plants. Some ferns are among the world's most serious weed species, including the bracken fern growing in the Scottish highlands, or the mosquito fern (Azolla) growing in tropical lakes, both species forming large aggressively spreading colonies. There are four particular types of habitats that ferns are found in: moist, shady forests; crevices in rock faces, especially when sheltered from the full sun; acid wetlands including bogs and swamps; and tropical trees, where many species are epiphytes (something like a quarter to a third of all fern species).

Especially the epiphytic ferns have turned out to be hosts of a huge diversity of invertebrates. It is assumed that bird's-nest ferns alone contain up to half the invertebrate biomass within a hectare of rainforest canopy.

Many ferns depend on associations with mycorrhizal fungi. Many ferns only grow within specific pH ranges; for instance, the climbing fern (Lygodium palmatum) of eastern North America will only grow in moist, intensely acid soils, while the bulblet bladder fern (Cystopteris bulbifera), with an overlapping range, is only found on limestone.

The spores are rich in lipids, protein and calories, so some vertebrates eat these. The European woodmouse (Apodemus sylvaticus) has been found to eat the spores of Culcita macrocarpa and the bullfinch (Pyrrhula murina) and the New Zealand lesser short-tailed bat (Mystacina tuberculata) also eat fern spores. 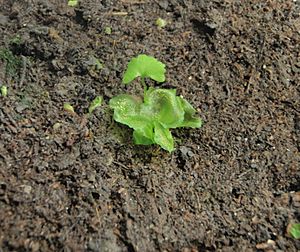 Ferns are vascular plants differing from lycophytes by having true leaves (megaphylls), which are often pinnate. They differ from seed plants (gymnosperms and angiosperms) in their mode of reproduction—lacking flowers and seeds. Like all land plants, they have a life cycle referred to as alternation of generations, characterized by alternating diploid sporophytic and haploid gametophytic phases. The diploid sporophyte has 2n paired chromosomes, where n varies from species to species. The haploid gametophyte has n unpaired chromosomes, i.e. half the number of the sporophyte. The gametophyte of ferns is a free-living organism, whereas the gametophyte of the gymnosperms and angiosperms is dependent on the sporophyte.

The life cycle of a typical fern proceeds as follows:

All content from Kiddle encyclopedia articles (including the article images and facts) can be freely used under Attribution-ShareAlike license, unless stated otherwise. Cite this article:
Fern Facts for Kids. Kiddle Encyclopedia.