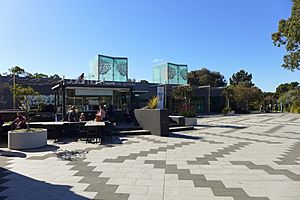 Melbourne Gardens was founded in 1846 when land was reserved on the south side of the Yarra River for a new botanic garden. It extends across 38 hectares (94 acres) that slope to the river with trees, garden beds, lakes and lawns. It displays almost 50,000 individual plants representing 8,500 different species. These are displayed in 30 living plant collections.

Cranbourne Gardens was established in 1970 when land was acquired by the Gardens on Melbourne's south-eastern urban fringe for the purpose of establishing a garden dedicated to Australian plants. A generally wild site which is significant for biodiversity conservation, it opened to the public in 1989. On the 363 hectares (897 acres) site, visitors can explore native bushland, heathlands, wetlands and woodlands. One of the features of Cranbourne is the Australian Garden, which celebrates Australian landscapes and flora through the display of approximately 170,000 plants from 1,700 plant varieties. It was completed in 2012.

Royal Botanic Gardens Victoria is home to the State Botanical Collection, which is housed in the National Herbarium of Victoria. The collection, which includes 1.5 million preserved plants, algae and fungi, represents the largest herbarium collection in Australia and wider Oceania. It also includes Australia's most comprehensive botanical library.

In 1846 Charles La Trobe selected the site for the Royal Botanic Gardens from marshland and swamp.

In 1857 the first director was Ferdinand von Mueller, who created the National Herbarium of Victoria and brought in many plants.

In 1873 William Guilfoyle became Director and changed the style of the Gardens to something more like the picturesque gardens that were around at that time. He added tropical and temperate plants.

In June 2015 the Gardens brought together the elements of the organisation under the name Royal Botanic Gardens Victoria, incorporating Melbourne Gardens, Cranbourne Gardens, the National Herbarium of Victoria and the Australian Research Centre for Urban Ecology (ARCUE) 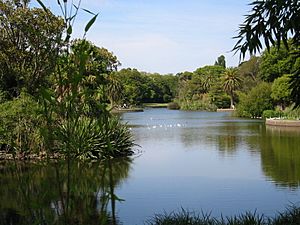 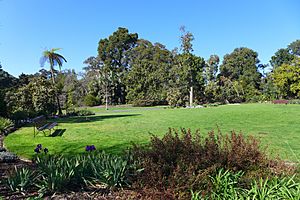 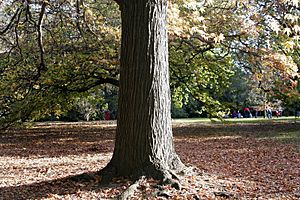 Autumn at the gardens

From the gardens establishment in 1846, much of the native vegetation was removed as botanists such as Baron Von Mueller planted a range of species from around the world. While initially much of the native wetlands and swamplands in the gardens were left, around the turn of the 20th century these were re-landscaped to create the Ornamental Lake. Despite this however, there are some large eucalypts remaining including the prominent Separation Tree, a 300-year-old River Red Gum, under which Victoria was declared a separate colony. In August 2010 the Separation Tree was attacked by vandals and then attacked again in 2013, by 2015 it was dead and removal of the canopy and branches commenced. The Royal Botanic Gardens, Cranbourne focus solely on Australian native plants.

The Royal Botanic Gardens Melbourne were initially intended to be a horticultural exhibition for the public to enjoy, many seeds were traded between early European botanists such as Arthur and Von Mueller, who planted non-native species. The Queen and her grandfather, Dame Nellie Melba and Paderewski contributed plantings on occasions throughout the gardens history.

Since its earliest days, the Royal Botanic Gardens is involved in plant research and identification. This is done primarily through the National Herbarium of Victoria, which is based at the Gardens. The Herbarium is also home to the State Botanical Collection, which includes over 1.2 million dried plant specimens, and an extensive collection of books, journals and artworks. Research findings are published in the journal Mulleria, which is a scientific representation of the work done in the Gardens in any one year. More recently, the Australian Research Centre for Urban Ecology has been established to look at plants which grow in urban environments specifically. 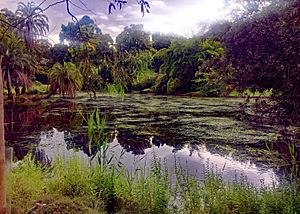 Ornamental Lake Minutes Before a Thunderstorm 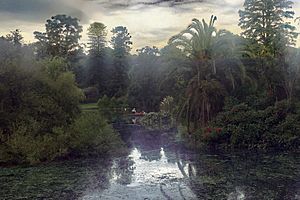 All content from Kiddle encyclopedia articles (including the article images and facts) can be freely used under Attribution-ShareAlike license, unless stated otherwise. Cite this article:
Royal Botanic Gardens Victoria Facts for Kids. Kiddle Encyclopedia.