Kids Encyclopedia Facts
Not to be confused with Franklin County, Virginia.
For the city that is now part of West Virginia, see Franklin, West Virginia.

Franklin is the southwesternmost independent city in Hampton Roads, Commonwealth of Virginia. As of the 2010 census, the population was 8,582. The Bureau of Economic Analysis combines the city of Franklin with Southampton County for statistical purposes.

The city of Franklin had its beginnings in the 1830s as a railroad stop along the Blackwater River. During this era, the river was used to transport goods to and from Albemarle Sound in North Carolina. 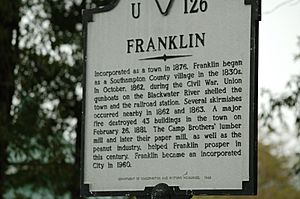 In 1862, the Civil War came to Franklin, in what was referred to as the Joint Expedition against Franklin. As several U.S. Navy flag steamships, led by the USS Commodore Perry, tried to pass through Franklin on the Blackwater River, a band of local Confederates opened fire on the ships. As stated by an officer aboard one of the ships, "The fighting was the same—Here and there high banks with dense foliage, a narrow and very crooked stream, with frequent heavy firing of musketry."

In all, the battle yielded five naval casualties killed in action and 16 wounded. As the naval vessels retreated, the Confederates tried to block the narrow Blackwater River by felling large trees across it. In the end, the Confederate attempts failed, as no soldiers were captured and no ships were lost. A total of seven Medals of Honor were awarded to individual seamen for their distinguished service.

Industrialization and the Camp family

It was not until 1887 that Franklin began to see significant growth. Six brothers from the Camp family, with local roots, took possession of a local sawmill. The sawmill was small and had been operating for several years alongside the Blackwater River With the Camp family's acquisition of the mill, it experienced 20 years of rapid growth under the leadership of Paul Douglas Camp (president), James Leonidas Camp (vice-president) and Robert Judson Camp (secretary-treasurer). At the end of this period, after a bout with near-bankruptcy, World War I brought the Camp family back to financial success, bringing along with it the city of Franklin. By 1918, "Tiny Franklin had become a booming wartime village..."

By 1955, the Camp Corporation's annual sales reached $28 million, much of which they spread throughout the city of Franklin. The Camp family, with a strong sense of family and community, gave much back to the city of Franklin through above average wages and generous donations to local causes. On May 29, 1956, the residents of Franklin were informed that the Local Camp Manufacturing Corporation had just negotiated a merger with the Union Bag and Paper company operating out of New York. This merger formed the Union Camp Corporation.

The city continued to grow along with Union Camp, and was incorporated as an independent city in 1961, separating from Southampton County.

Union Camp thrived in Franklin until 1999 when it was acquired by International Paper. Though Union Camp no longer exists in Franklin, the Camp family name lives on. Their legacy is most notable in the community, with Paul D. Camp Community College, the James L Camp Jr. YMCA, the Texie Camp Marks Children's Center, and the Ruth Camp Campbell Memorial Library. 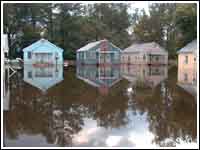 Flooding in Franklin after Hurricane Floyd 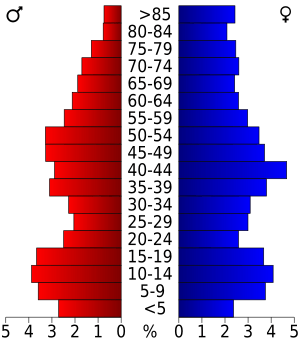 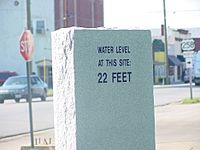 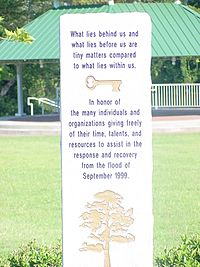 The Blackwater River, running along the eastern boundary of the city, played an important role in the industrialization of the city, but has not been immune to problems plaguing rivers, most notably flooding. In 1999, in the aftermath of Hurricane Floyd, downtown Franklin was submerged under as much as 12 feet (3.7 m) of water as the Blackwater River swelled to a historic crest of 26.4 feet (8.0 m). The resultant flooding caused the submersion of 182 business and 150 homes, located primarily in downtown. When the hurricane name "Floyd" was retired in 2000, the name chosen as a replacement was Franklin. In 2006, Franklin endured another large-scale flood reaching just below the record 23-foot (7.0 m) water line set from the 1999 flood. The flood was the result of a storm which distributed a large amount of water throughout the watershed in which Franklin resides. 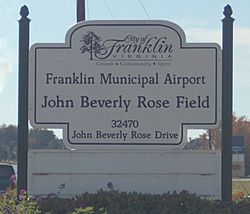 These are all places that provide education at some level in the area of Franklin.

The climate in this area is characterized by hot, humid summers and generally mild to cool winters. According to the Köppen Climate Classification system, Franklin has a humid subtropical climate, abbreviated "Cfa" on climate maps.

Modern Franklin has two major industrial sectors: agriculture and manufacturing. Franklin is listed as being the 13th-most profitable and 12th-largest farming community in the state. The neighboring areas of Southampton and Isle of Wight counties, along with the city of Suffolk, are all ranked in the 20 most profitable farming counties, with Southampton County being the eighth-largest in the state.

With the high agricultural profile of Franklin and the surrounding areas, it was only with the opening of the Camp Lumber Mill in 1887 that the manufacturing sector began to expand. The Camp Lumber Mill became the Union Camp Corporation, which was eventually bought by International Paper. Today, the International Paper mill, located on the eastern boundary of the city, beside the Blackwater River, produces lumber, pulp and paper products and other chemical by-products.

International Paper announced on October 22, 2009, that the paper mill would be permanently closed, which took place in May 2010. This eliminated ~1,100 jobs from the community. They have since resumed limited manufacturing, producing fluff pulp. This resulted in 213 new jobs.

All content from Kiddle encyclopedia articles (including the article images and facts) can be freely used under Attribution-ShareAlike license, unless stated otherwise. Cite this article:
Franklin, Virginia Facts for Kids. Kiddle Encyclopedia.