Southampton County is a county located on the southern border of the Commonwealth of Virginia. North Carolina is to the south. As of the 2010 census, the population was 18,570. Its county seat is Courtland.

During the 17th century, shortly after establishment of Jamestown, Virginia in 1607, English settlers explored and began settling the areas adjacent to Hampton Roads. In 1634, the English colony of Virginia was divided into eight shires (or counties) with a total population of approximately 5,000 inhabitants. Most of Southampton County was originally part of Warrosquyoake Shire. The shires were soon to be called counties. Warrosquyoake Shire was renamed Isle of Wight County in 1637.

Southampton County may have been named for Southampton, a major city in England, or for Henry Wriothesley, 3rd Earl of Southampton, one of the founders of the Virginia Company and a supporter of colonization in North America. 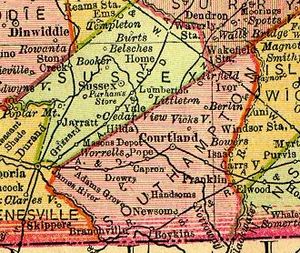 Southampton County from 1895 map of Virginia

Southampton County is bounded by the Blackwater River on the east and the Meherrin River on the west. The Nottoway River flows through the center of the county. All three rivers are tributaries of the Chowan River, which flows south into Albemarle Sound, North Carolina. The Blackwater River separates Southampton County from Isle of Wight County, and the Meherrin River separates it from Greensville County.

All content from Kiddle encyclopedia articles (including the article images and facts) can be freely used under Attribution-ShareAlike license, unless stated otherwise. Cite this article:
Southampton County, Virginia Facts for Kids. Kiddle Encyclopedia.