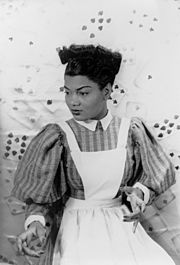 Bailey was born on March 29, 1918 in Southampton County, Virginia. She was married to John Randolph Pinkett from 1948 until they divorced in 1952. Then she was married to Louie Bellson from 1952 until her death in 1990. They had two children, one adopted. Bailey died on August 17, 1990 in Philadelphia, Pennsylvania. She was aged 72.

All content from Kiddle encyclopedia articles (including the article images and facts) can be freely used under Attribution-ShareAlike license, unless stated otherwise. Cite this article:
Pearl Bailey Facts for Kids. Kiddle Encyclopedia.