Joan Crawford (born Lucille Fay LeSueur; March 23, c. 1904 was an American film and television actress who began her career as a dancer and stage showgirl. In 1999, the American Film Institute ranked Crawford tenth on its list of the greatest female stars of Classic Hollywood Cinema. 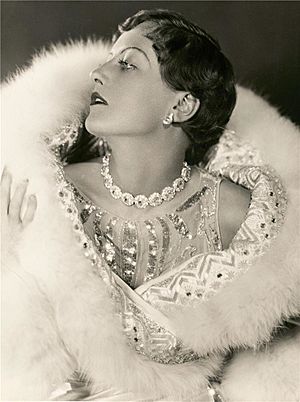 Beginning her career as a dancer in traveling theatrical companies, before debuting as a chorus girl on Broadway, Crawford signed a motion picture contract with Metro-Goldwyn-Mayer in 1925. In the 1930s, Crawford's fame rivaled, and later outlasted, MGM colleagues Norma Shearer and Greta Garbo.

Crawford often played hard-working young women who find romance and success. These stories were well received by Depression-era audiences, and were popular with women. Crawford became one of Hollywood's most prominent movie stars, and one of the highest-paid women in the United States.

Eventually her films began losing money, and, by the end of the 1930s, she was labelled "box office poison". Soon her career gradually improved in the early 1940s, and she made a major comeback in 1945 by starring in Mildred Pierce, for which she won the Academy Award for Best Actress. 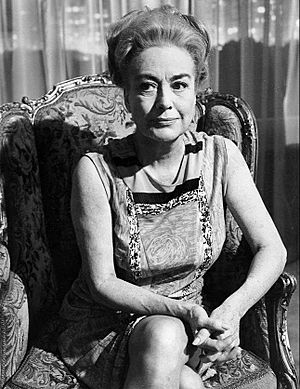 She would go on to receive Best Actress nominations for Possessed (1947) and Sudden Fear (1952). She continued to act in film and television throughout the 1950s and 1960s; she achieved box office success with the highly successful horror film Whatever Happened To Baby Jane? (1962), in which she starred alongside Bette Davis, her long-time rival.

In 1955, Crawford became involved with the Pepsi-Cola Company through her marriage to company Chairman Alfred Steele. After his death in 1959, Crawford was elected to fill his vacancy on the board of directors, serving until she was retired in 1973. In 1970, Crawford retired from the screen. Following a public appearance in 1974, after which unflattering photographs were published, Crawford withdrew from public life and became increasingly reclusive until her death in 1977.

Crawford married four times. Her first three marriages ended in divorce; the last ended with the death of husband Alfred Steele. She adopted five children. Crawford's relationships with her two elder children, Christina and Christopher, were not the best. Crawford disinherited the two, and, after Crawford's death, Christina wrote a well-known "tell-all" memoir titled Mommie Dearest (1978).

On May 8, 1977, Crawford gave away her beloved Shih Tzu, "Princess Lotus Blossom", being too weak to care for her. Crawford died two days later at her New York apartment of a heart attack. A funeral was held at Campbell Funeral Home, New York, on May 13, 1977. 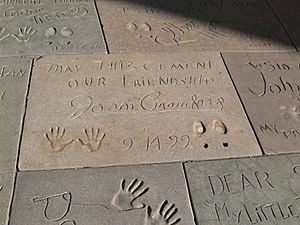 A memorial service was held for Crawford at All Souls' Unitarian Church on Lexington Avenue in New York on May 16, 1977, and was attended by, among others, her old Hollywood friend Myrna Loy. Another memorial service, organized by George Cukor, was held on June 24 in the Samuel Goldwyn Theater at the Academy of Motion Picture Arts and Sciences in Beverly Hills.

Crawford was cremated, and her ashes were placed in a crypt with her fourth and final husband, Alfred Steele, in Ferncliff Cemetery, Hartsdale, New York.

Joan Crawford's handprints and footprints are immortalized in the forecourt of Grauman's Chinese Theater on Hollywood Boulevard in Hollywood. She has a star on the Hollywood Walk of Fame at 1752 Vine Street for her contributions to the motion picture industry. Crawford was also voted the tenth greatest female star of the classic American cinema by the American Film Institute.

All content from Kiddle encyclopedia articles (including the article images and facts) can be freely used under Attribution-ShareAlike license, unless stated otherwise. Cite this article:
Joan Crawford Facts for Kids. Kiddle Encyclopedia.