One of baseball's first expansion teams, the Mets were founded in 1962 to replace New York's departed NL teams, the Brooklyn Dodgers and the New York Giants. The team's colors combine the Dodgers' blue and the Giants' orange. For the 1962 and 1963 seasons, the Mets played home games at the Polo Grounds. From 1964 to 2008, their home ballpark was Shea Stadium. In 2009, they moved into their current ballpark, Citi Field.

In their inaugural season, the Mets posted a record of 40–120, the worst regular season record since MLB went to a 162-game schedule. The team never finished better than second-to-last until the "Miracle Mets" beat the Baltimore Orioles in the 1969 World Series, one of the biggest upsets in World Series history. Since then, they have played in four World Series, including a dramatic run in 1973 that ended in a seven-game loss to the Oakland Athletics, a second championship in 1986 over the Boston Red Sox, a Subway Series loss against their cross-town rivals the New York Yankees in 2000, and a five-game loss to the Kansas City Royals in 2015.

The Mets qualified to play in the MLB postseason in 1988 and 2006, coming within one game of the World Series both years. After near-misses in 2007 and 2008, the team made the playoffs in 2015 for the first time in nine years, and won their first NL pennant in 15 years. The team again returned to the playoffs in 2016, this time with a wild card berth. This was the team's second back-to-back playoff appearance, the first occurring during the 1999 and 2000 seasons.

"Meet the Mets" is the Mets' signature song, written in 1961, one year before the first season, by Bill Katz and Ruth Roberts. It is played on the radio, during television broadcasts and at Mets' home games. 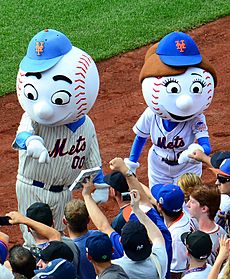 Mr. Met is the official mascot of the New York Mets. He was introduced on the cover of game programs in 1963, when the Mets were still playing at the Polo Grounds in northern Manhattan. When the Mets moved to Shea Stadium in 1964, fans were introduced to a live costumed version. Mr. Met is believed to have been the first mascot in Major League Baseball to exist in human (as opposed to artistically rendered) form.

Mrs. Met (formerly Lady Met) is the female counterpart to Mr. Met, and the couple sometimes appears with 2–3 smaller "children".

Jerry Koosman wearing his late-1960s' era Mets jersey, which served as an inspiration for the 2012–13 Mets pinstriped uniform.

The Mets' colors are blue and orange, originally chosen to honor the city's history of National League baseball; blue for the Brooklyn Dodgers, and orange for the New York Giants. Blue and orange are also the colors of New York City, as seen on its flag.

In 1998, black was officially added to the color scheme, although beginning with 2012 the black elements in the uniform began to be phased out, and were completely eliminated in 2013.

The cap logo is identical to the logo used by the New York Giants in their final years, and is on a blue cap reminiscent of the caps worn by the Brooklyn Dodgers. In the primary logo, designed by sports cartoonist Ray Gotto, each part of the skyline has special meaning—at the left is a church spire, symbolic of Brooklyn, the borough of churches; the second building from the left is the Williamsburgh Savings Bank, the tallest building in Brooklyn; next is the Woolworth Building; after a general skyline view of midtown comes the Empire State Building; at the far right is the United Nations Building. The bridge in the center symbolizes that the Mets, by bringing National League baseball back to New York, represent all five boroughs.

Also in 1999, the logo received a slight alteration. The "NY" to the left of the team script was removed. No other notable changes were made. 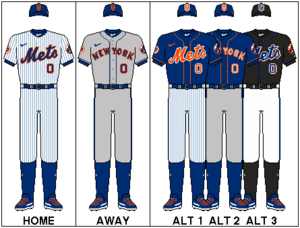 The uniform of the New York Mets

Currently, the Mets wear an assortment of uniforms.

The home uniforms are white with blue pinstripes, and feature the "Mets" script and block lettering and numbers in blue with orange outline. The uniforms are paired with a standard blue cap featuring the "NY" script in orange, plus blue undersleeves, belts and socks. The white pinstriped uniforms replaced both the cream pinstriped uniform and the alternate white uniform starting with the 2015 season.

The gray road jerseys feature a radially-arched "NEW YORK" script in Tiffany style, player numerals and names in blue outlined in orange, and blue placket and sleeve piping. Like the home uniforms, the road grays are worn with blue caps, undersleeves, belts and socks.

For the 2014 season, a Mr. Met sleeve patch was added to the blue alternate jerseys, a feature that was later removed in favor of the primary logo in 2017.

The Mets' standard blue batting helmet with the "NY" in orange is currently used regardless of the cap and jersey design they wear. This was in contrast to previous seasons where they play with alternate batting helmets to match their caps and jerseys. 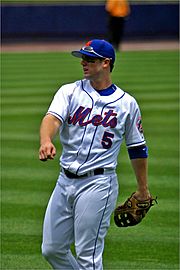 David Wright is the current Mets captain and third baseman.

All content from Kiddle encyclopedia articles (including the article images and facts) can be freely used under Attribution-ShareAlike license, unless stated otherwise. Cite this article:
New York Mets Facts for Kids. Kiddle Encyclopedia.